The Cloisters Museum & Gardens: A Branch of The Metropolitan Museum of Art

I go to The Cloisters on a pretty regular basis and they have interesting walking tours and lectures especially in the warm months. If you like Medieval or religious art, this is a museum that is worth visiting. It is out of the way and be prepared to walk up a hill but in the summer months, the view of the Hudson River is spectacular and the gardens are beautiful.

The Cloisters in Fort Tyron Park

Don’t miss the walking tours and gallery talks at the museum. I have recently been to a series of walking gallery talks dealing with the history of Medieval arts. There were discussions on Medieval art between Christian and Muslim religions, Traveling the Silk Road and its influences on art in the regions and the collection and how it has improved and grown over the years. It seems there has been a up tick in this type of art.

The building is just beautiful as it was created from pieces of religious sites all over Europe. Many of the doorways, cloisters (archways), stone work and fountains and windows come from churches that had been destroyed by wars over the past 600 years. Bits and pieces of all of the these buildings are displayed in the architecture of the museum itself. Some are on permanent loan to the museum from foreign countries. Don’t miss the famous “Hunt of the Unicorn” tapestries that are on display here. They are quite a spectacular exhibit.

The Hunt of the unicorn tapestries

Be sure to visit the outside terraces of the Cloisters to see the views of the Hudson River below and the beautiful gardens of Fort Tyron Park where the building is located. It is a sea of green lawns and woods and beautifully landscaped flowering paths.

There is a nice café on property but there is also a nice outdoor café in the park as well as a small restaurant row on Dyckman Avenue at the foot of the park right near the subway stop. There are also many terrific Spanish restaurants on Dyckman Street as you walk down the block towards Fort George Hill.

I recently went to the Cloisters for a very interesting walking tour called “Holly & Hawthorne: Decorating for a Medieval Christmas” and the use of plants like holly, mistletoe, pine and ivy were used in the winter months to decorate the churches and homes of the people until the Puritan influences took over. 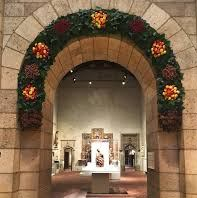 The Cloisters decorated for Medieval Christmas

The tour guide discussed by touring the paintings and tapestries where these symbolic plants took shape during this time. She even explained how ivy when it reaches sunlight that its shape goes from a  three leaf shape to a heart shape which was symbolic during the Middle Ages. The gardens were a good source of inspiration for the holidays.

The Cloisters decorated for Christmas

Welcome to The Cloisters, the branch of The Metropolitan Museum of Art devoted to the art and architecture of medieval Europe. Set on a hilltop with commanding views of the Hudson River. The Cloisters is designed in a style evocative of medieval architecture specifically for the display of masterpiece created during that era. Arranged roughly chronologically and featuring works primarily from Western Europe, the collection includes sculpture, stained glass, tapestries, painting, manuscript illumination and metalwork. The extensive gardens feature medieval plantings, enhancing the evocative environment.

The Gardens at the Cloisters in bloom

History of the Museum

Imposing stone portals from French churches of the twelfth and thirteenth centuries open onto a gallery that features rare Spanish frescoes and French sculpture.

The twelfth-century apse from the church of San Martin at Fuentiduena, Spain and the great contemporary fresco of Christ in Majesty from a church in the Pyrenees Mountains dominate the space. Sculpture from Italy and Spain enriches the chapel, which is the setting for a celebrated concert series.

The fine carving of this cloister from the monastery of Saint-Guilhem-le-Desert, near Montpellier, harmoniously and playfully adapts the forms of Roman sculpture in a medieval context. The plants depicted in the sculpture, acanthus and palm, are growing in pots near the small fountain. The gallery also features early sculpture from Italy, Islamic Spain and elsewhere in France.

Architectural elements from the twelfth-century church of Notre-Dame-du-Bourg at Langon near Bordeaux form the setting for the display of thirteenth-century French stained glass and important Burgundian sculpture in wood and stone.

Monks from the Cistercian abbey at Potaut in Aquitaine once gathered for daily meetings in this twelfth-century enclosure known as a chapter house. At the time of its purchase in the 1930’s by a Parisian dealer, the column supports were being used to tether farm animals.

The distinctive pink stone of this cloister, featuring capitals carved with wild and fanciful creatures, was quarried in the twelfth century near Canigou in the Pyrenees Mountains for the nearby Benedictine monastery of Saint-Michel-de-Cuxa. The typical cloister garden features crossed paths and a central fountain from the neighboring monastery of Saint-Genis-des-Fountaines. Both medieval and modern species of plants are grown in the garden. In winter, the arcades are enclosed and fragrant potted plants fill the walkways.

With thirteenth-century windows overlooking the Hudson River, the gallery features stained glass from France’s great churches, including Saint-Germain-des-Pres in Paris. Sculptures and paintings from France, Italy and Spain evoke the great age of cathedrals.

From an original series of nine hangings created about 1400 for a member of the Valois court, the tapestries portray fabled heroes of ancient, Hebrew and Christian history, including the legendary King Arthur. It is among the earliest sets of surviving medieval tapestries.

With brilliant colors, beautiful landscapes and precise depictions of flora and fauna, these renowned tapestries depicting the hunt and capture of the mythical unicorn are among the most studied and beloved objects at The Cloisters. Probably designed in Paris and woven in Brussels about 1500 for an unknown patron, these hangings blend the secular and sacred worlds of the Middle Ages.

One of the most celebrated early Netherlandish paintings in the world, the Merode Altarpiece, painted in Tournai about 1425-30, forms the centerpiece of this gallery. The altarpiece, intended for the private prayers of its owners, represents the Annunciation to the Virgin Mary taking place in a fifteenth-century household. Details of the scene are echoed in the late medieval furnishings of the room in which other works made for private devotion are also exhibited.

Large fifteenth-century limestone windows from the refectory of the former Dominican monastery in Sens, France, illuminate the hall, which showcases sculpture and altarpieces from Germany, Italy and Spain as well as a great tapestry from Burgos Cathedral.

Beneath richly colored stained-glass windows from fourteenth-century Austria carved images from royal and noble tombs of France and Spain fill the chapel-like setting.

Silver-stained glass roundels decorate the windows of the Glass Gallery, complementing small works of art, many made for secular use, with their lively, sometimes worldly subjects. Carved woodwork from a house in Abbeville, in northern France, forms a backdrop for paintings and sculpture.

Long thought to be part of the abbey at Bonnefont-en-Comminges, the elements of this cloister come instead from other monasteries in the region including a destroyed monastery in Tarbes. The herb garden contains more than 250 species cultivated in the Middle Ages. Its raised beds, wattle fences and central wellhead are characteristic of a medieval monastic garden.

The stone cloister elements were created primarily for the Carmelite convert at Trie-sur-Baise in the Pyrenees. The garden is planted with medieval species to evoke the millefleurs background of medieval tapestries, such as the Unicorn series.

An array of precious objects in gold, silver, ivory and silk reflects the wealth of medieval churches. Illuminated manuscripts testify to the piety and taste of royal patrons such as Jeanne d’Evreux, Queen of France; jewelry and a complete set of fifteenth-century playing cards suggest more worldly pastimes.

*Some galleries may be closed for construction or maintenance.

*Disclaimer: This information is taken right from the Cloisters pamphlet from the Metropolitan Museum of Art. Please call the museum before visiting to see if anything has changed with the hours or days open. It is well worth the trip uptown to visit The Cloisters. Take the A subway up to 190th Street and take the elevator up to Fort Tryon Park and walk across the park.