Monday-Wednesday: Groups by Appointment Only; Groups of 10 or more by appointment

I visited the Dyckman Farmhouse on day during my walk around the Inwood section of Manhattan and came upon this old farmhouse in the middle of the commercial district by Columbia University’s football field. You have to take the A or the 1 Subway uptown to get there but it is one of the last vestiges of the farming community that once was Manhattan in the late 1700’s and early 1800’s. It has been there since the family donated it to the city in 1916. It should not be missed when visiting Manhattan. I wrote more about my trip there in “MywalkinManhattan.com” blog site.

The Dyckman House, now the Dyckman Farmhouse Museum in the oldest remaining farmhouse on Manhattan island, a remainder of New York City’s rural past. The Dutch Colonial-style farmhouse was built by William Dyckman in 1785. It was originally part of over 250 acres of farmland owned by the family. It was once the center of a thriving farm with fields and orchards of cherry, pear and apple trees. It is now located in a small park at the corner of Broadway and 204th Street in the Inwood section neighborhood of the city.

Don’t miss the self-guided tours of the house. You can tour all three floors of the house to see the bedrooms on the second and third floors and the first floor palours and receiving areas. The basement area has the ‘winter kitchen’ where all the cooking of the house was done and it was the room that kept the rest of the house warm during the winter months.

The house was slightly decorated for the Christmas holidays with garland and ivy and holly to make it look more festive. The Dyckman House was built at a time after the Revolution where the excesses of the Victorian era had not taken hold and the Christmas holidays were more subdued and concentrated on going to church and a light luncheon that afternoon. The decorations of the home reflect this.

The museum is decorated for Dutch Christmas

Don’t miss the gardens in both the spring and summer to see everything in full bloom. Even in the winter it is interesting to watch the paths and see what needs to be accomplished for spring planning.

It is an interesting look into how the Dutch farmers lived and worked.

William Dyckman was the grandson of Jan Dyckman, who came to the area from Westphalia in 1661. Jan Dyckman, a shoemaker and another Dutch settler, Jan Nagel purchased much of the land between present 155th Street and the northern tip of the island. Members of the Dyckman and Nagel families lived on the land for three generations until the Revolutionary War broke out.

The house and front gardens

During the Revolutionary War, the British occupation of Manhattan in 1776-83, the Dyckman’s, like many other patriots, fled the city and did not return until the British had been defeated. When the war ended and the Dyckman’s found their home and orchards had been destroyed, they built a new house on the Kingsbridge Road, now Broadway. They chose this location on a major thoroughfare in order to supplement their income by providing accommodations for travelers on their way to and from Manhattan.

William Dyckman, who inherited the family estate built the current house to replace the family house located on the Harlem River near the present West 210th Street, which he had build in 1748 and which was destroyed in the American Revolutionary War.

There was also 30 people living within three other houses scattered across the roughly 250 acre farm. The residents included laborers and other Dyckman family members. The main outbuildings for the farm were built close to the farmhouse including a cider mill, corn cribs, barns and stable (Dyckman Farmhouse Museum Alliance).

The house is designed with:

The Relic Room: Objects that are displayed were discovered from digs in the area.

The Second Floor Bedroom: Some of the rooms are decorated with furnishings dating from the 18th and 19th centuries and reflect colonial life around 1800.

The Parlor: This area was used for a variety of activities from dining to socializing.

The Bedroom: There were two bedrooms on the first floor and one large sleeping space on the second floor. 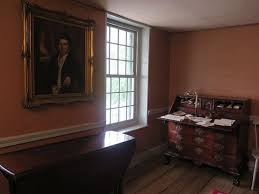 The Garden Area: On the half acre of family land left they have constructed a reproduction a smokehouse and outbuildings along with gardens planted with thousands of new plants that include things like bleeding hearts and foxglove.

The gardens and smokehouse

The current two-story house is constructed of fieldstone, brick and white clapboard and features a gambrel roof and spring eaves. The porches typical of the Dutch Colonial style but were added in 1825. The house interior has parlors and an indoor (winter) kitchen, with floors of varying-width chestnut wood. The house outdoor smokehouse kitchen, in a small building to the south, may predate the house itself.

The house stayed in the family for several generations until it was sold in 1868, after which it served as a rental property for several decades. By the beginning of the 20th century, the house was in disrepair and in danger of being demolished. Two sisters of the original family and daughters of the last Dyckman child to grow up in the house, Mary Alice Dyckman Dean and Fannie Fredericka Dyckman Welch, began restoration of the farmhouse in 1915-16 under the supervision of architect Alexander M. Welch, the husband of Fannie. They then transferred the ownership of the house to the City of New York in 1916, which opened it as a museum of Dutch and Colonial life, featuring original Dyckman family furnishings.

The Dyckman Farmhouse in Inwood

The farmhouse, which is not only the oldest remaining in Manhattan, but the only one in the Dutch Colonial style and the only 18th century farmhouse in the borough as well. It has New York City Landmark and a National Historic Landmark status since 1967. A major restoration of the house took place in 2003, after which it reopened to the public in the fall of 2005.

*Disclaimer: This information comes from the Historic House Trust and Wikipedia and the NYC Parks System. The site is free to visit and takes less than an hour to visit. During the summer months, it is nice to visit the gardens and property. It is a interesting property to visit and when you are through with your tour, there are many nice Spanish restaurants in the area on Broadway and along 207th Avenue corridor. It is a nice place to walk around and explore.