Don’t miss this little hidden site in Old Tappen, NJ. The Baylor Massacre site holds a rich history in the county and in the country’s founding. It will make you realize what an important role that the State of New Jersey had in the Revolutionary War and the lives sacrificed to win the war.  My hats off to these brave men and women who helped fight for our freedom. 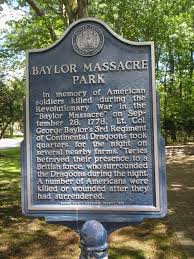 After midnight on September 28, 1778 during America’s Revolutionary War, the brutal surprise attack by the British forces on the sleeping men of the 3rd Continental Light Dragoons began. Today this is known as the Baylor Massacre. Now a County-owned historic park and burial ground, the Baylor Massacre Site is located along the Hackensack River in River Vale in Northern Bergen County, New Jersey.

In the Autumn of 1778, British General Cornwallis occupied southern Bergen County with a force of 5000 soldiers. Their purpose was to gather and forage for food to feed the army that would be garrisoned in New York City during the upcoming winter.  Bergen County, with its fertile land and industrious Jersey Dutch farms, was a major source for food for both armies during the Revolution.

The Third Continental Light Dragoons, under the command by Lt. Colonel George Baylor, was one of four regiments of dragoons authorized by the Continental Congress. On the 27th of September, these 104 officers and men were dispatched to watch the bridge over the Hackensack River at the intersection of modern Rivervale and Old Tappan Roads to support General Wayne and his men in Tappan, New York.

The British forces were lead by General Charles “No Flint” Grey, who earned his nickname in the 1777 battle with General Wayne’s Pennsylvania troops when he ordered his men to remove the flints from their muskets to prevent an accidental gunshot and to use bayonets to insure the surprise of a nighttime attack. These tactics were used again in River Vale.

Grey’s men used their muskets to club and their bayonets to stab the sleeping dragoons. Eleven were killed immediately. Three more including 2nd in Command Major Alexander Clough (Washington’s Chief of Intelligence for the Hudson Valley), died of their wounds in Tappan the following day.  Records indicate that as many as 22 men died some several weeks later. Two officers and 37 men, most of who were wounded, managed to escape into the night. One British soldier was killed when shot by a dragoon.

Grey’s men quickly gathered their prisoners and captured American equipment and continued up North. Fortunately General Wayne had been alerted of the movement of the British and had evacuated Tappan. The next day a detachment of the Bergen County Militia was dispatched to River Vale to locate any survivors. Finding six of the dead patriots at the bridge and fearing the possible return of British troops, they hurried to bury them in three abandoned leather tanning vats by the river.

The burial location was passed on by word of mouth for many generations. The only physical maker was the abandoned millstone from the tannery. Abram C. Holdrum removed the millstone from the site around 1900. For many years it was displayed in from of the local Holdrum School. 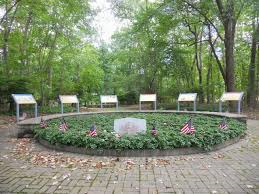 The Baylor Massacre Site in the warmer months

In 1967, a local resident became alarmed that a new housing development would destroy this historic burial site. Through careful research the approximate location of the burials was identified. County Freeholder D. Bennett Mazur was contacted and as a result, the County sponsored an archaeological dig that located six sets of remains. The County eventually acquired the site and dedicated it as a County Park. In 1974, the patriots’ remains were re-interred in the park and the original millstone was donated to serve as their gravestone.

In 2003, the County dedicated new interpretive panels and accessible pathways at the Baylor Massacre site. It is open year round during daylight hours.

Note from the Blogger: it is easy to miss the site so watch for the markers. For those interesting in the historical background of the Revolutionary War and New Jersey’s role in the war, take the time to visit this and other sites around Bergen County, New Jersey. They may be small but very significant.

Watch this interesting video that someone posted on YouTube.com