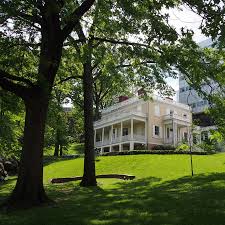 In the late 1700’s, well-to-do dwellers moved to Harlem Heights in the summer, seeking its cool breezes. They also wanted to avoid yellow fever, a summer threat in lower Manhattan, Hamilton and his wife, Elizabeth  (of the influential Schuyler family) often visited friends here and decided to build their own retreat.

In 1802, they moved in and Hamilton began commuting to his downtown law office, a 90 minute carriage trip. He and Elizabeth also began to entertain friends, colleagues and leader in their elegant home and gardens. Little did Hamilton know that his time at The Grange would be brief. 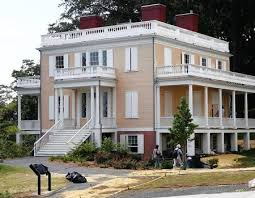 Alexander Hamilton (1755-1804) grew up on Nevis and St. Croix, islands in the Caribbean, where thousands of enslaved Africans labored in sugar cane fields. As a clerk for a shipping company, young Hamilton worked directly with ship captains bringing in their human cargo. This experience haunted him and lead to his lifelong opposition to slavery.

Saved by a Hurricane:

Hamilton’s mother, Rachel, raised him and his brother along. A shop owner, she died of yellow fever when Hamilton was in his early teens. That’s when he started working at the shipping company. He impressed his boss with his energy, ambition and intelligence. Then the local newspaper published his letter describing a devastating hurricane. Townspeople were so taken by his writing that hey helped pay his way to America to further his education. In the letter, he wrote: …’the ear-piercing shrieks of the distressed were sufficient to strike astonishment into Angels’.

Hamilton plunged into American life. He enrolled in King’s College (now Colombia University) in New York. He wrote passionately about the revolutionary ideas of American rebels. When the fighting began, young Hamilton joined them. By the time he married at 25, he was a published writer, seasoned military leader and a close friend of George Washington. 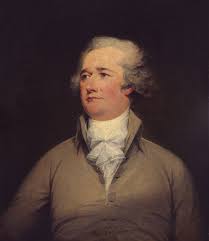 Hamilton and Elizabeth loved children. They had eight of their own and took in others. Hamilton’s work as a lawyer helped pay bills while he served the county with little if any pay.

After years of differences, Aaron Burr challenged Hamilton to a duel in 1804. Burr, now the country’s vice-president, felt he had to defend his honor. Friends tried to soothe both men but failed. Facing possible death, Hamilton wrote letters to his friends and family. After he died from Burr’s bullet, Elizabeth read his letter and these final words: ‘Adieu, best of wives and best of women. Embrace all my darling children for me’. 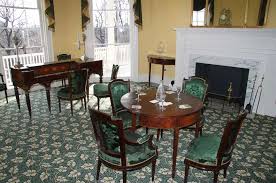 Rooms at the Hamilton Grange have period furniture

Family friends made sure Elizabeth had enough money to live with her children at The Grange. She preserved Hamilton’s thousands of letters, essays and other writings. She also started an orphanage and was its director into her 80’s. At age 91, she went to live with a daughter in Washington DC. She charmed presidents and other dignitaries until she died in 1854 at age 97. 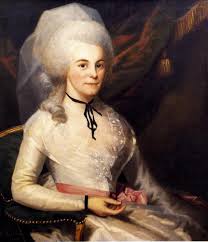 By age 21, Alexander Hamilton identified  himself with the revolutionary cause. He organized an artillery unit that defended New York City and fought in New Jersey and Pennsylvania. George Washington noticed Hamilton’s daring and intelligence and appointed him as a personal aide.

Hamilton’s new job required him to be writer, diplomat and advisor to Washington. Even so, Hamilton ached to return to battle. Eventually, Washington appointed him Colonel of an infantry brigade. Hamilton led a major attack in the battle of Yorktown in 1781.

As a lawyer after the war, Hamilton defended New York citizens who had been loyal to Britain. He argued the new treaties and laws protecting all citizens and that loyalists would help rebuild the city. He also led the New York Manumission Society, which protected and educated free and enslaved African-Americans.

At the 1787 Constitution Convention, Hamilton argued for a strong central government. With James Madison and John Jay, he wrote essays explaining the new Constitution and urging citizens to vote for its ratification. Politicians and judges still consult “The Federalist Papers” about the meaning of the US Constitution.

In the New Government:

As first Secretary of the Treasury, Hamilton recommended the federal government pay off states debts, tax imported goods, establish a national bank and promote manufacturing. His ideas worried Sectary of State Thomas Jefferson, who believed the federal government did not have powers. Hamilton argued the Constitution supported flexible ‘implied powers.’ Congress and the Supreme Court agreed. By the end of Hamilton’s term, the country had excellent credit and a strong economy.

Hamilton resumed his law practice in 1795 after leaving federal service. His clients included free and enslaved African-Americans whom he helped for no pay. He also defended a newspaper editor sued for slander by Thomas Jefferson. Hamilton argued journalists had the same rights as citizens to freedom of speech. His victory strengthened United States citizens’ First Amendment rights.

Hamilton often criticized President Jefferson’s government and his vice-president, Aaron Burr. His harsh words about Burr lead to the duel that ended Hamilton’s life. Alexander Hamilton’s short and controversial life left the United States poised to become a powerful nation something he dreamed of but did not see.

Hamilton Grange is on West 141st Street between Convent and St. Nicholas Avenues, its third location. In 1889, the city began building new streets across the estate. A church bought The Grange and moved it to safety two blocks away. In 2008, the National Park Service moved it to its current location, still on the original estate.

Hamilton Grange is open year-round, 9:00am to 5:00pm, Wednesday through Sunday except Thanksgiving and Christmas. Exhibits and a film highlight Hamilton’s major achievements. Guided tours are first-come, first-serve and limited to 15 visitors. Enjoy quiet activities on the grounds. 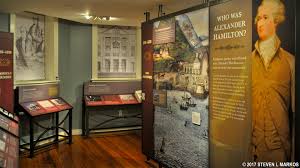 We strive to make our facilities, services and programs accessible to all. Call or visit our website.

Hamilton Grange is near bus routes and subway stations; see maps at right. Visit http://www.mta.info for routes and schedules. All applicable federal, state and city laws and regulations apply here.

Hamilton Grange National Memorial is one of over 390 parks in the National Park System. To learn more about national parks, visit http://www.rips.gov.

*This information was taken off the pamphlet available at the site put out by the National Park Service, U.S. Department of the Interior: National Memorial New York and I give them full credit for the information.

*Bloggers Note: Because of the Musical on Broadway presently, the site has gotten very busy during the summer months but don’t let that deter you from visiting. The house and the tour are very interesting.

I mentioned this on my blog “MywalkinManhattan” when visiting this part of Harlem. There are a lot of nice restaurants close by and the SUNY campus is right there to relax in. The neighborhood is save but still you have to watch yourself anytime you walk around NYC.