Bergen County has a lot of hidden gems located here and there in the County.

Don’t miss the Northwest Bergen History Coalition when it happens every two years.

I put “MywalkinManhattan” on hold for a few days as the local activities in New Jersey started to take up my time. There is so much to see and do as the weather is getting warmer.

The Northwest Bergen History Coalition every year gives people the opportunity to visit almost a dozen different historical sites in the upper part of Bergen County, NJ and take the time to tour and explore all the sites with the help of trained docents and volunteers who take immense pride in showing off their site all for the low price of $10.00 ($15.00 the day of the event). Be prepared to drive though because all the sites can be a distance from one another. Also, have a a game plan because there is no way you can see everything in one day. You will only have from 10:00am-4:00pm so plan to visit the remaining…

The Shop next to the Pond

The Wyckoff Historical Society was established to research, preserve and educate about the rich history of Wyckoff, NJ. The organization was founded in 1974 and is incorporated. Recent programs included a walking tour of Wyckoff.

The Society recently restored the old Wyckoff barbershop that was donated to them and now sits on the town property by the Zabriskie Pond and the historic Zabriskie Home. Inside the building houses all sorts of local artifacts, farm tools and vintage furniture along with historic photos of the town of Wyckoff, NJ.

The little building sits right on the Zabriskie Pond.

History of the Museum:

This 1890’s structure was recorded as being a barbershop in 1905 when it was owned by John Lawrence, who worked for the railroad by day and cut hair at night. It was also a cobbler shop for several years and again a barbershop. The building was on Main Street and Everett Avenue relocating to its current home and donated to the Wyckoff Historical Society by resident and member, Sebastian Gaeta.

The building was neglected for several years and was restored several times, most recently in the summer of 2018 by the society including a full paint job of the interior and exterior and refinishing the bare floors.

On display are artifacts from Russell Farms, a barber chair from longtime Wyckoff barber, Frank Muscara, a 1905 child’s dress, Lenape artifacts, a Hoosier cabinet and photographs. Please check their website for opening dates.

Disclaimer: This information was taken directly from the Wyckoff Historical Society pamphlet and I give them full credit for the information. Please email them for more information. 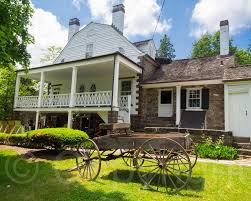 Open: Please check out their website for the dates when the house is open to the public.

I visited the Zabriske House in May 2016 and 2019 for the Northwest Bergen History Coalition 6th Annual History Day. The house is left the way the last owner. Grace Zabriskie,  willed it to the town with all the original furnishings. 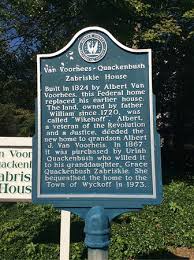 It has period furnishes, family heirlooms and antiques. The docents will take you on a tour of the house and show you where all the later additions were added and how they make up the whole house. As you walk through the house, you can see the difference in structure of the home plus how the last owner lived. 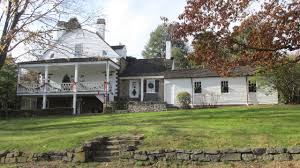 The Zabriske House in Wyckoff, NJ

Don’t miss touring the gardens in the Spring as Mrs. Zabriskie worked with a Botanist to plant the gardens to bloom at different times. She planted it in stages so that she could entertain in them but still treated the gardens similar to the house as if you had to walk into a room. It is very nice and colorful in the Spring.

On the terrace there are people to guide you through the house and docents to take tours. The ladies had a nice reception laid out for all of the people who came to visit.

The original stone structure of the VanVoorhees-Quackenbush-Zabriskie House was built in 1730 by William Van Voorhees. It is believed to be the oldest house in Wyckoff, NJ. In 1824, William’s son, Albert, completed a major addition to the house in the classically Dutch colonial style. The original structure then became the dining room (NWBHC).

History of the House: (Taken from the Wyckoff History Page)

The Van Voorhees-Quackenbush-Zabriskie House has been a local landmark for over 275 years and is believed to be the oldest structure in the Town of Wyckoff, NJ. In 1720, William and John Van Voor Haze, yeoman of Bergen County, purchases 550 acres of land in what is now Wyckoff. The brothers were descended from Dutch settlers who emigrated from Holland in 1660 (Wyckoff History).

The first stone house was built circa 1730 by William. The land was cleared and the family farmed, raising table crops and staples such as grain, corn, potatoes and grapes. Over time, apple orchards and dairy farming became main occupations in the area. The Jersey Dutch were especially skilled at animal husbandry. They were considered the best farmers and gardeners in the American Colonies (Wyckoff History).

There were only about 20 families in the area in 1775, when the house served as the village store and tavern. William’s son, Albert, served in the Militia in the Revolutionary War. The original stone structure later became the dining room of the house, when a large addition was added in 1824 by William’s son, Albert when he was 86 years old. He had just one son, John, but likely expanded the house for his nine grandchildren and their wives and children. Over the years, in addition to serving as a home, the house served as a not only home, tavern and store but also as a hotel and ballroom for area parties (Wyckoff History).

The original 1730 house has a steeply pitched roof and overhanging eaves designed to protect the building and foundation from rain. It has a two piece “Dutch” door to allow ventilation while keeping animals outside. Inside is a five foot high fireplace which originally was the sole source of heat and was used for all cooking (Wyckoff History).

The much larger 1824 structure is three stories originally tall with a sub-basement. It contains four fire places, again for heat. It has two half and four quarter moon windows and two oval windows. There are four bedroom with pegs to hand clothes on (no closets then). Its exterior demonstrates the classic Dutch Gambrel roof with an upper 23 degree roof line and then a lower 45 degrees roof line. This beautiful design was developed by the Dutch in northern New Jersey and up the Hudson River and is found nowhere else in the world. The typical Dutch front porch has two benches on either side of the entrance (Wyckoff History).

The property left the Van Voorhees family in the mid-1800’s. In 1867, it was purchased by Uriah Quackenbush. Uriah and Keziah Quackenbush had one son, John, who died as a young adult. Grace Quackenbush was his only child and was two years old when he died. She was raised in the house by her grandparents, who left the property to her when they passed on, after Grace had married John Zabriske (Wyckoff History).

During her lifetime, Grace modernized the house (including adding an indoor bathroom) and restored the appearance of the home using authentic period antique furniture and furnishings. She also created three beautiful formal gardens on the landscaped property with her friend, Mrs. Elizabeth Spencer, a botany major (Wyckoff History).

The house is considered one of the finest examples of American architecture in northern New Jersey. The current House Museum has been called one of the finest in New Jersey. In 1973, Mrs. Grace Q. Zabriske, who was the last resident, willed the house and its antique furnishings to the Township of Wyckoff, when she died that year. The “Zabriskie” house belongs to everyone in Wyckoff to enjoy (Wyckoff History).

Please check out their website for when the house is open to the public.