On Fridays from 6:00pm-8:00pm are pay as you wish for Museum Admission

I have visited the New York Historical Society several times over the years and I have to say that make quite a statement on the history of New York City and the State of New York City. It has a interesting permanent collection of paintings and statuary. There are a lot of things that First Families of New York City have donated to the museum that tell the story of families born and raised here.

I was honored here years ago when a picture I took for the 9/11 Photo Album Book came out in 2002. All the photographers that contributed to it were in attendance. Another time I was here for a private event on John Adams back in the early 2000’s that was injunction with the American Museum of Natural History. Over the years, the Historical Society has brought in more interesting exhibitions. The current exhibition “Hudson Rising” on the history and ecological changes due to humans along the Hudson River. It was an interesting look of the natural changes to the river from manufacturing times today as the river is being reclaimed for recreational uses.

The whole museum is a retrospect on the timeline of the New York City with an array of art out any one time. There are Masters from the Hudson River School, statues from all eras and special exhibitions that tell an interesting story of some part of the City’s past.

History of the NY Historical Society:

The Historical Society was founded on November 20, 1804 largely through the efforts of John Pintard. He was for some years secretary of the American Academy of Fine Arts as well as the founder of New York’s First Savings Bank. With a group of prominent group of New Yorkers on the founding board including then Mayor DeWitt Clinton, the organization was established on December 10, 1804 (Wiki). 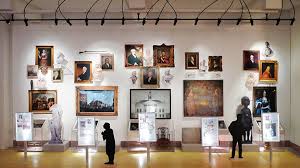 The Collections of the NY Historical Society

The NY Historical Society had its share of growing pains over the years in that it had been in heavy debt during its first couple of decades. It also moved several times over the years as well. It moved from the Government House, which it had been housed in since 1809 to the New York Institution, the formerly the city almshouse on City Hall Park in 1816. In 1857, it moved into the first building constructed specifically for its collection at Second Avenue and 11th Street. The collection moved to its final home to Central Park West in 1908 (Wiki).

The current Society building was designed by architects York & Sawyer, who were known for bank designs. The second part of the building was designed by architects Walker and Gillette. The building has just finished a $65 million dollar renovation in 2011 and all the galleries have been refreshed. The new director of the Society, Louise Mirrer is leading the establishment into the 21st Century.