Blackwell Island, which was called Welfare Island from 1921 to 1973 and is now known as Roosevelt Island was purchased by New York City in 1828. Various facilities on the island were built including a penitentiary, almshouse, city hospital, the New York Lunatic Asylum and the Smallpox Hospital (some of these buildings still exist).

In 1872, the City of New York built a lighthouse. The supervising architect was James Renwick Jr., who also designed several other buildings on the island for the Charities and Correction Board as well as more famous works such has St. Patrick’s Cathedral. (Wiki)

Legends abound about the construction of the lighthouse. Two names, John McCarthy and Thomas Maxey, are associated with the various legends. The 1870 report of the warden of the lunatic asylum that an industrious patient had build a seawall near the asylum that had reclaimed the land. The legends indicate that he had incorporated Civil War cannons. 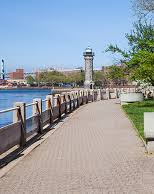 The legend indicates that the builder was bribed with bogus money to demolish the fort for the construction of the lighthouse. For many years, a saying was inscribed on a stone near the lighthouse:

This is the work

Who built the Light

House from the bottom to the

Top All ye who do pass by may

Pray for his soul when he dies.

The lighthouse was operated by the City instead of the U.S. Lighthouse Board. In its 1893 annual report, the Lighthouse Board generally praised the operations of Blackwell Island Lighthouse but indicated that the Board has unfairly criticized because of the City’s occasional failure to keep the light in operation. The Board advocated banning private lights. The 1917 U.S. Coast Pilot indicated that there was a private light at the north end of the island. (Wiki)

The light was operated until about 1940. In the 1970’s, the lighthouse was partially restored. The restoration was completed in 1998. (Wiki)

The lighthouse is approximately 50 feet (15m) tall. It is constructed of gray gneiss, rough ashlar that was quarried on the island by inmates from the penitentiary. It has an octagonal base and an octagonal shaft. There is an entrance on the south side under a projecting gable and a pointed Gothic arch. Two south-facing slit windows in the shaft light the interior. At the top of the shaft there is a band of ornamented corbels below the gallery, which is surrounded by an iron railing. The lantern is octagonal with a shallow conical roof. An 1893 photograph and a 1903 movie show that it probably had a much taller, steeper conical cap when it was built. The optics were provided by the U.S. Lighthouse Board. (Wiki)

Lighthouse Park is located on the northernmost section of Roosevelt Island and can be seen from Carl Schurz Park. On a beautiful sunny day, it is a very picturesque view from the park.

Disclaimer: this information was taken from Wikipedia site and the Roosevelt Island Historical Society. This little ‘gem’ of a park can be seen by walking to the most northern part of Roosevelt Island by way of the Main Street which runs through the island.