“Church on the Green” (The First Reformed Church of Hackensack), the Cemetery and the Hackensack Green

Due to their national historic significance the church, cemetery and the adjacent Hackensack Green were placed on the National Register of Historic Places in 1983. The Green dates back to 1696 and is one of the oldest public squares in NJ. A strategic point during the American Revolution, Hackensack was a small village centered on The Green, a public meeting place where public notices were posted. In the 18th century it was where punishments were inflicted on criminals and where the local militia trained.

General Washington headquartered here in November 1776, while he surveyed the local roads and bridges. On November 20, 1776 he led his army into Hackensack. The army camped on The Green as Washington  made the important decision to continue the retreat from overwhelming British and Hessian forces. On March 23, 1780, the British raided Hackensack and burned the courthouse that stood on the Green at that time. Since 1715, a Bergen County courthouse building faced The Green in Hackensack, the County Seat since 1710, making it the historic heart of Bergen County (County of Bergen Division of Cultural and Historic Affairs). 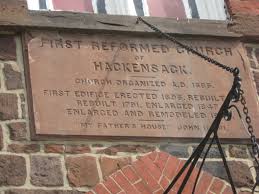 The First Dutch Reformed Church congregation was organized in 1686, the oldest Reformed Dutch  congregation in Bergen County and second oldest in NJ. (County of Bergen Division of Cultural and Historic Affairs).

During the first ten years, churchgoers worshiped in a private home outside the limits of modern day Hackensack. The official name of the congregation was the “Dutch Reformed Church of Ackensack” and comprised thirty-three residents from Hackensack, New Barbadoes and Acquackanonk. All three of these townships made up most of northeastern New Jersey. Acquackanonk was located in the northern portion of modern Essex County. New Barbadoes was comprised of land west of the Hackensack River, while Ackensack was located to the east. In April of 1696, Captain John Berry (1619-1712), the proprietor of a large portion of land in northeastern New Jersey, donated two and three-quarter acres of his property to the congregation to support their efforts to build the church. Most of present-day Hackensack at that time was called”New Barbadoes Township” and Hackensack is thought to have gotten its unofficial name when the Church relocated to New Barbadoes and brought the name “Ackensack” with it.

The emergence of the Dutch Reformed Church in America developed from Dutch colonization of New York and New Jersey during the 17th century. Dutch settlement was prominent in these areas before the British took control of the area in the late 1600’s. Still, the Dutch were freely allowed to practice their religion in America, even under British sovereignty. The Hackensack First Reformed Church would become the second oldest Reformed Church in New Jersey and the first in Hackensack. Construction of the church was completed in the latter part of 1696. John Berry’s donation of land was appropriately dubbed, “The Green” and the church soon became known as “The Church on the Green”. The first sermon was preached on November 15th, 1696 based on Psalm 26:8 “Lord, I have loved the habitation of thy house and the place where thine honor dwelleth.” Although the first church was largely completed in 1696, the steeple was not built until 1708. The entire structure was rebuilt in 1728 on the same site. These two early church buildings were thought to have been octagonal structures. 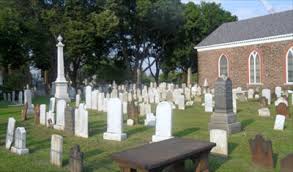 The Back of the Dutch Reformed Church

In 1780, during the Revolutionary War, the British invaded Hackensack. They burned the courthouse and jail and threatened to destroy the Church on the Green, which was located adjacent to the aforementioned buildings. Fortunately, the church was spared. Dutch Colonial architecture with sandstone walls being the prominent feature of the building. Some aspects, especially the arched and pointed windows, appear to have Gothic elements. The front of the church has three sets of double doors with similarly arched doorways and transom windows. This style was a precursor for many of the Reformed Dutch churches that were eventually build in New Jersey. Although the present day building dates from 1791, the church was enlarged in 1847 and again in 1847 and again in 1869, thus containing newer elements.

The attached cemetery is original to the first building’s construction in the late seventeenth century but during the renovation in 1847, it was also enlarged. The neighboring service house was built in 1867 and was used as a Sunday school, lecture hall and chapel.

The churchyard cemetery features simple stone tablets and obelisks that are surrounded by a wrought iron fence. Some notable burials include General Enoch Poor (1736-1780), Colonel and New York Mayor Richard Varick (1753-1831), Congressman George Cassedy (1783-1842) and Congressman Adam Boyd (1746-1835). General Enoch Poor’s burial is especially noteworthy as he served alongside George Washington during the Revolutionary War. Additionally, both Washington and the Marquis de Lafayette were in attendance at Poor’s funeral. Enoch Poor’s gravestone reads: “In Memory of the Hon’ble Brigadier General Enoch Poor of the State of New Hampshire who Departed this Life on the 8 day of Sept: 1780 aged 44 years/Washington, Lafayette and a portion of the American army attended the burial of Gen. Poor. In 1824, Lafayette visited this grave and turned away much affected, exclaimed, “Ah, that was one of my Generals!” Poor died in 1780, before the close of the Revolutionary War, so this gravestone is clearly not the original.

The cemetery at the Dutch Reformed Church

The Reformed Church was nominated to the National Register of Historic Places on April 25, 1983. Included in this nomination was the “Green”,  which is one of the oldest public squares in New Jersey. This area encompasses the Churchyard, the cemetery, the church outbuilding and the green area that is adjacent to the Bergen County Courthouse. There are a few monuments that occupy this space, including a statue memorial to General Enoch Poor, which was dedicated in 1904 and the Hackensack War Memorial, which dates to 1924. The church continues to be a prominent feature of the history of Hackensack through community and self-guided walking tours. In addition to this, there are yearly Memorial Day commemorations, where a wreath is placed over General Enoch Poor’s grave and a tour of the church is provided to the attendees of the celebration.

Surrounding the Green, there are a few other historical buildings:

*Site of the Burned Jail

*The Annual Christmas Tree on the Green

Disclaimer: This information was taken directly from the Bergen County Historical Society pamphlet and the Clio Website on the First Dutch Reformed Church of Hackensack and from visiting downtown Hackensack. Please call the church at (201) 342-7050 for details on visiting it. Please remember this is a resting place.

One thought on “‘Church on the Green’ (The First Reformed Church of Hackensack), the Church Cemetery and the Hackensack Green 42 Court Street Hackensack, NJ 07601”

This is a text widget, which allows you to add text or HTML to your sidebar. You can use them to display text, links, images, HTML, or a combination of these. Edit them in the Widget section of the Customizer.
Loading Comments...
Comment
×
%d bloggers like this: