The Bergen County Division of Cultural and Historic Affairs

Located on Pomander Walk Road near the Hackensack River, this land was in use as a burial ground by the Native Americans prior to the arrival of the European settlers. This site might have been used for hundreds of years as a burial site for the Native peoples.

African slaves, who worked the farmland of the early European settlers, like the Zabriskie’s who owned the 125 acre farm that surrounded it, were subsequently buried at this location as were some of the early settlers. In 1663, the great elder, Oratam, was the Chief Sachem for the Ackingsacks, who lived along the Hackensack River. Oratam promised to give Sarah Kiersted a parcel of land between the Hackensack River and Overpeck’s Creek called “Neck of Land”. 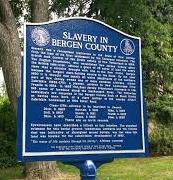 It consisted of 2,260 acres which included Teaneck, Bogota and Ridgefield Park. The  original patent was dated October 21, 1667. On March 25, 1685, the East Jersey Proprietors conveyed 183 acres of this patent, located on the Hackensack River in what is now Teaneck, to Albert Sabboresco (Zabriskie) of Bergen, a planter/farmer.

Albert Zabriskie, his descendant and later Henry Kip, owned the enslaved African American men, who were used to work the farmland and build the early colonial sandstone houses. Even though slavery was outlawed in 1804, the last slaves were not freed until 1865 making New Jersey the last of the Northern States to abolish slavery.

To prevent the loss of this sacred ground, the ‘Coalition to Preserve Teaneck’s Native American/African Slave/Settler Cemetery’, was organized. With the Coalition’s encouragement, in 2006 Teaneck bought this open parcel of land on the banks of the Hackensack River. It can be visited during daylight hours and is designated with a Blue Historic Marker erected by the town of Teaneck, NJ.

The historic Zabriskie-Kip Farmhouse (now a private residence) is located around the corner from the site on a buff on River Road facing the Hackensack River.

Disclaimer: This information was taken directly from the handout from the Bergen County Division of Cultural and Historic Affairs. There is no fee for this site but be warned, there is not much to see. There will be plantings and a small memorial is being planned.