I have been to the Hermitage Museum many times for events and they do a nice job portraying the house in different periods at different times of the year.

I have taken the Haunted House tours during Halloween when The Hermitage hosts seances. Their medium was not that convincing and I did not believe a word he said. We took a tour around the house at midnight and that was interesting.

The house can be quite spooky at midnight but then every house is spooky at midnight. I noticed the boards creaking and the wind blowing around the house but that’s what old houses do. The house does creak a lot and when the wind acts up you can jump. Still there was noting to convey to me that the place was haunted. 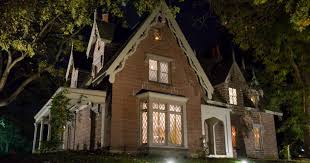 The Hermitage is spooky at Midnight

The house was decorated in 2018 for Christmas in the 1930’s during the Depression and it showed that people still decorated and gave presents in a more subdued way during this tough time. The tour guides will go through how the family fortunes changed the way people lived in the house up to the 1970’s when the last family member died.

In 2019, the house was decorated for the Victorian era and was done up quite elaborately. The Dining Room was set in the best china and silver with decorative poppers for Christmas lunch. The meal that day was one of the biggest and finest of the year with roasted oysters, roast turkey, sweet and mashed potatoes and many root vegetables. 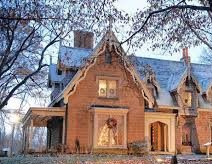 The Hermitage is beautiful at Christmas time

The Living Room was decorated with an elaborate tree with lights and beautiful Christmas ornaments and there was garland all over the room leading into the hallway with more garland on the banister.

The upstairs rooms were set with seasonal plants and clothing depicting the era. It looked like the family was going on an outing.

The Hermitage Museum in Ho-Ho-Kus, New Jersey is a charming and romantic mid-19th century Gothic Revival cottage. Surrounded by more than four acres of park land, the Hermitage is restored and furnished  to reflect the lifestyle and interests of the Rosencrantz family during the second half of the 19th century.

The fourteen room home is built in the Gothic Revival architecture that surrounds the original Dutch American home built in the 1700’s. The original colonial estate was bought by Ann Barlow DeVisne, who  was from Manhattan, for herself and her five children. One of the children, Theodosia Bartow Prevost, lived in the house with her husband, James Marcus Prevost. Major James Marcus Prevost fought on the side of the British during the Revolutionary War in battles in Georgia and North Carolina. Her husband would be later killed in the War.

During battle time with the British, Theodosia invited General Washington to stay at the house which he and his troops did in 1778. Theodosia welcomed all troops, both British and American to stay at the house during the war. In 1782, she married Aaron Burr, a soldier she had met during the war.  On top of her five children by her first marriage, she had another child with Aaron Burr named Theodosia. Theodosia Prevost-Burr died in 1794.

The house was then sold to the Rosencrantz family in 1807 and then the house was expanded from the Dutch tradition into the Gothic Revival addition between 1847-48 by noted architect, William H. Ranlett. The addition was at the request of Elijah Rosencrantz Jr. The house was lived in by four generation of Rosencrantz’s. Elijah’s daughter, Mary Elizabeth, was born in the house in 1885 and lived there her entire life until 1970 when she fell ill. She left the house to the State of New Jersey as a National Historical site.

The admission to the house is $7.00 for children 6-12, $4.00 for Seniors and Students. Children under 6 and members are free. Save $1.00 on the adult admission with your AAA card. You can become a member at http://www.thehermitage.org

Guided tours take place Wednesday through Sunday at 1:15pm, 2:15pm and 3:15pm. The last tour begins at 3:15pm. Reservations are required for groups of 10 or more.

Some of the events I have attending in the past:

Please don’t miss visiting the home during Halloween for their ‘Ghost tours’ . It can get quite spooky in the house at midnight with the wind hallowing and things creaking.

The Hermitage is special at the holidays

During Christmas time,  the house is decorated for the holidays. This year’s theme in 2018 is “Home for the Holidays: A 1930’s Christmas at the Hermitage”. The house is decorated at the time of the Great Depression and how people dealt with those times while still providing holiday cheer to their families. The decorations do not reflect Victorian times but more when times were tough and people had to watch their budgets. 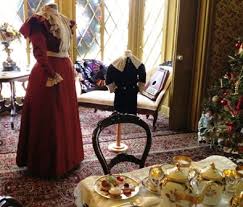 Please call the above number or email the facility for more information on hours or changes in schedule.

Disclaimer: this information was taken directly from The Hermitage pamphlet and Wikipedia and Google. Please call the facility for information on special events.

This is a text widget, which allows you to add text or HTML to your sidebar. You can use them to display text, links, images, HTML, or a combination of these. Edit them in the Widget section of the Customizer.
Loading Comments...
Comment
×
%d bloggers like this: