I stumbled across the Amiable Child Memorial over the summer when I was walking Riverside Drive for “MywalkinManhattan” project (see walking 155th Street) and came across this small memorial when I was passing Grant’s Tomb. It is off to the side on the path by the woods. It is a small monument and very humbling in its look. It is a small urn on a pedestal marking a grave of a small child surrounded by a fence. I got the following information from the NYC Parks Department website when I wanted to know more about the site:

This unique New York City monument marks the site of one of the few private graves on public land within the five boroughs. It belongs to St. Claire Pollock (the namesake of nearby St. Claire Place), a child who died on July 15, 1797 in the fifth year of his life, probably from a fall from the cliffs of the parkland onto the rocks near the Hudson River. 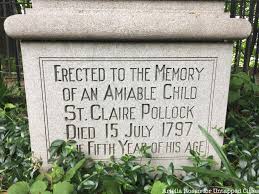 In the two centuries that have passed since the tragedy of the “Amiable Child” as he was described on his headstone-different accounts of St. Claire origins and family have persisted. George Pollock, the owner of the property on which the boy was buried, was either his father or his uncle. He was a linen merchant of Scots-Irish or possibly English descent, who lived in a mansion on Strawberry Hill (later called Claremont) in the 1790’s. He  had sold his property to Mrs. Cornelia Verplanck, his former neighbor, by January 18, 1800 when he wrote as follows: 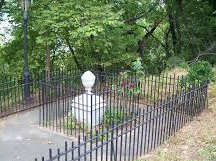 “There is a small enclosure near your boundary fence within which lie the remains of a favorite child, covered by a marble monument. You will confer a peculiar and interesting favor upon me by allowing me to convey the enclosure to you so that you will consider its part of your own estate, keeping it however always enclosed and sacred.”

Claremont Hill was the site of the Battle of Harlem Heights, fought during the Revolutionary War on September 16, 1776. By 1806, it had been acquired by Michael Hogan, a former British Consul in Havana, who built Claremont Mansion (for which Claremont Avenue was named). Possible sources for the name are Hogan’s birthplace of County Clare, Ireland and his friend Prince William, Duke of Clarence, who would ascend the English throne as King William IV in 1830. Known as the site of a popular roadside inn by 1860, Claremont was acquired by the City from the heirs of Joel Post in 1873 for the development of Riverside Park.

In the 1890’s, Claremont Inn was host to numerous politicians, socialites and entertainers including the Morgan’s, Vanderbilt’s and Whitney’s, Lillian Russell and Admiral George Dewey. By 1907, the Inn had been transformed into a restaurant, serving the likes of Cole Porter and James J. Walker. It was destroyed by fire in 1950. The playground which now stands on the site was built shortly afterwards.

A century after the Tomb of the Amiable Child was laid, New York’s most famous monumental grave-Grant’s Tomb-was completed. The domed structure across Riverside Drive, designed by architect John Duncan and sculptor John Massey Rhind, was dedicated on April 27, 1897. The later structure is as grand a testimony to the accomplishments of national leader as the monument to the amiable child is a modest and touching tribute to a young boy who never had the opportunity to grow into adulthood. This monument was dedicated on May 3, 1967 (www.nycgovparks.org/parks/riverside-park/mounments/1206).

*You really have to look off the beaten path to see this unique little memorial but it is very touching and soulful. Take the time when visiting the neighborhood to visit this very touching site. You will find it by the path behind Grant’s Tomb.

Look for more sculptures  by looking at the Parks website http://www.nycgovparks.org.