Open: Monday:  Closed to general public; visitation by advanced appointment only/Tuesday-Friday: 10:00am to 4:00pm/Saturday-Sunday: 10:00am to 5:00pm

I came across the Morris-Jumel Mansion on my walk around Manhattan and noted it on my blog site “MywalkinManhattan.com”. This is the only remaining Colonial residence left on the island of Manhattan and is worth the time to take the tour of the house for its significance in the American Revolutionary War and in it’s later history.

When touring the house, you get to see most of the rooms furnished with period furniture and some with the family belongings. The house had other uses over the years and the curators are trying bringing it back to the period of time when Madame Jumel lived there. The tour guides have some interesting stories on the colorful history of the house.

The History of the Morris-Jumel Mansion:

The Morris-Jumel Mansion, Manhattan’s only remaining Colonial era residence is unique in its combination of architectural and historical significance. Built as a summer ‘villa’ in 1765 by the British Colonel Roger Morris and his American wife, Mary Philipse.

It originally commanded extensive views in all directions: of New York harbor and Staten Island to the south; of the Hudson and Harlem Rivers to the west and east and of Westchester county to the north. The estate named “Mount Morris” stretched over 130 acres from the Harlem to Hudson Rivers and the working farm grew fruit trees, and raised cows and sheep.

Colonel Morris was the son of the famous architect Roger Morris, a fact which may explain the extremely innovative features of the Mansion such as the gigantic portico, unprecedented in American architecture and the rear wing which was the first octagon built in the Colonies.

The house’s situation and large size made it ideal as military headquarters during the Revolution and it was occupied successively by Washington, General Henry Clinton and the Hessian General Baron von Knyphausen. As the Morris’s were loyal to Britain during the Revolution, so their property was seized and sold after its conclusion. In 1790, Washington returned for a cabinet dinner at which he entertained Jefferson, Adams, Madison, Hamilton and Colonel Knox among others.

The later history of the house centers on the Jumel’s. Stephen Jumel was a wealthy French émigré, who married in 1804, his beautiful and brilliant mistress, Eliza Bowen. They bought the mansion in 1810. In 1815, they sailed to France and offered Napoleon safe passage to New York after Waterloo. Although he eventually declined the offer, they did acquire from his family many important Napoleonic relics-some of which can be seen in the blue bedroom on the second floor.

Eliza Jumel and her family

Favorable tariffs and faster sailing technology made Atlantic trade in raw materials in raw materials and luxury goods and luxury products highly lucrative.  Stephen made his fortune  as a merchant. Later as his business floundered, Eliza applied herself to the real estate trade, buying and selling land and renting properties downtown. 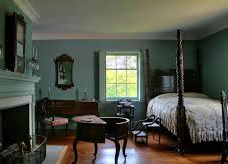 Her success made large profits for her husband and herself  at a time when it was very unusual for a woman to be so active in business. Stephen died in 1832 and Eliza married the ex-Vice-President Aaron Burr in the front parlor one year later.

The Reception Room at the Morris-Jumel Mansion

Eliza filed for divorce in 1833, a lengthy process which was not finalized until 1836 at the time of Burr’s death.  Eliza lived in the house until her death at age 90 in 1865, exactly 100 years after the mansion was built. On her death , she was considered one of the wealthiest women in America.  In 1904, the city of New York purchased the house and turned it into a museum.

Today, the mansion is the oldest remaining house in Manhattan and is a museum highlighting over 200 years of New York history, art and culture. The neighborhood surrounding the mansion is known as the Jumel Terrace Historic District. The hill that Roger Morris once called “Mount Morris” in the 18th century became better known as “Sugar Hill” during the Harlem Renaissance of the 1920’s.

*The buildings in this district are protected by the New York Landmarks Commission and must be maintained as if they were new, so this is why the area has changed little over time. The Morris-Jumel Mansion is a proud member of the Historic House Trust of New York City and partner of the New York City Department of Parks & Recreation.

*This information is taken from the Morris-Jumel Mansion press release and pamphlet and from the New York City Parks Department. Please call or email the mansion in case times have changed or events planned.