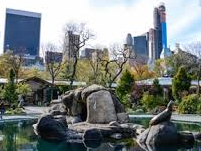 I love coming to the Central Park Zoo when I am visiting the Upper East Side. The zoo is a nice to just relax and reflect from the hustle and bustle of the City. On a quiet midweek day, there is nothing like going to the 2:00pm seal feeding at all times of the year. The seals get so excited and the humans like seeing the seals in their playful mood.

The zoo is small so touring it will only take about an hour or so to see all the exhibitions. You have a choice of seeing the monkeys, the birds, the seals and the penguins. They finally moved the polar bear out of the zoo a few years ago and he always looked so bored with his life. He would give you a look like ‘get me out of here’.

The smaller animals like the monkeys and the penguins look like they are having more fun in their enclosed homes with more room to move around. They always look at us as visitors in an amusing way like why are we so interested in them. It is an interesting interaction with the animals there to see their reaction to us.

There is also more birds, amphibians and bats to see in other exhibitions around the zoo and smaller outside areas to view the smaller animals such as pandas and leopards that have finally been given space to roam around.

There is also a nice gift shop just outside the zoo and the Dancing Crane Cafe is the zoo restaurant which is over-priced and the food the few times I have tried it was mediocre. It is not like the cafe up at the Bronx Zoo that was pretty decent.

Don’t miss the hourly concert at Delacorte Clock when the animal sculptures dance to the music played. It is such an enjoyable experience.

History of the Zoo:

The Zoo was not originally part of the layout for Central Park when designed by Fredrick Law Olmstead and Calvert Vaux. A small menagerie developed on the edge of the park with exotic animals that had been donated to the park starting with a bear cub tied to a tree in 1859 and a monkey in 1860. Other animals came later including cranes, a peacock and a goldfish.

In 1860, the American Zoological and Botanical Society wanted to create a zoo somewhere in New York City. In 1864, the zoo received a formal charter, making it the second publicly owned zoo behind the Philadelphia Zoo. Though a formal zoo had not yet been created, the menagerie, with its free admission and good location made it the most popular attraction in Central Park.

By the 1930’s, the menagerie had become run down and was not sufficient to hold the animals. In 1834, Mayor Fiorello La Guardia hired Robert Moses to head the unified Parks Department and a new more formal zoo was created. The new zoo was opened on December 2nd, 1934 and by 1936 over six million people had visited the zoo.

By 1967, the zoo was again falling apart due to years of negligence and budget cuts. New York City’s fiscal crisis had affected the Parks System and conditions had gone downhill. In 1980, The Wildlife Conservatory (the former NY Zoological Society) signed a fifty year agreement in April of that year and started a renovation of the zoo from 1982 to its opening in 1988.

When the Zoo opened in August of 1988, the concept of the zoo had changed. The Wildlife Conservation Society had taken over the Queens Zoo, the Prospect Park Zoo in Brooklyn and already had possession of the Bronx Zoo and the direction of the society was toward conservation and care of animals while the Prospect Zoo was to be used as a Children’s Zoo and the Queens Zoo would concentrate on North American animals. The Children’s Zoo next to the Central Park Zoo went through its own renovation in the late 1990’s and is now called the Tisch Children’s Zoo after businessman, Laurence Tisch who had donated most of the money for the renovation.

Located between 104th and 106th Streets off Fifth Avenue

Hours: Depends on the season and the Dawn to Dusk rule

This time of the year (Spring) the Central Park Conservatory is in full bloom and its magnificence is at its finest in the Spring and Summer months. In May, the tulips and daffodils are just finishing their flowering and the lilacs are just finishing their blooming and still fragrant the garden. The lawns are all a deep green and the dogwood trees are just starting to bloom around the rings of the gardens.

Don’t miss walking around the Gardens off to the side closest to the Harlem Meir as they are open through the renovation. You will see beds of flowers along the fountain’s edge and can admire all the sculpture. What is most impressive is that in-between the Gardens is a vast green lawn surrounded by trees. The lawn of the Conservatory is nice to just admire with the trees lining it on all sides.

The best time to come to the Conservatory Gardens is in early to late Spring and the early Summer when everything is in full bloom. This is when Mother Nature shows us her great magic.

The beauty of the Central Park Conservatory is that it blooms all year around except the winter and even then, there is a quiet elegance to the gardens. 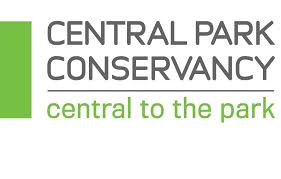 History of The Central Park Conservatory:

The Central Park Conservatory Garden is the only formal garden in Central Park, New York City and is located approximately between 104th and 106th Street on Fifth Avenue in NYC. The Garden consists of about six acres of formal landscaping of trees, shrubs and flowers. The formal garden is divided into three smaller gardens each with a distinct style: Italian, French and English. The Central Conservatory Garden is an officially designated Quiet Zone and offers a calm and colorful setting for a leisurely stroll and intimate wedding. 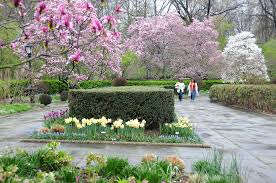 The Central Park Conservatory in the Spring

It takes its name from a conservatory that stood  on the site from 1898 to 1934. The park’s head gardener used the glasshouses to harden hardwood cuttings for the park’s plantings. After the conservatory was torn down, the garden was designed by Gilmore D. Clarke, landscape architect for Robert Moses, with planting plans by M. Betty Sprout and constructed and planted by WPA workers, it was opened to the public in 1937.

The Garden is composed of three distinct parts, skillfully restored since the 1980’s and is accessible through the Vanderbilt Gate at Fifth Avenue and 105th Street, a quarter south of the park’s northeast corner. The Vanderbilt Gate once gave access to the forecourt of Cornelius Vanderbilt II’s chateau designed by George Browne Post, the grandest of the Fifth Avenue mansions of the Gilded Age, at 58th Street and Fifth Avenue, sharing the Plaza with Plaza Hotel. The wrought iron gates with cast iron and repousse details, were designed by Post and executed in an iron foundry in Paris. 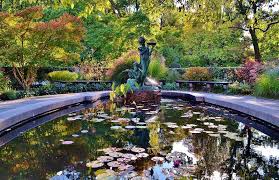 The fountain at the Central Park Conservatory

Below the steps flanked by Cornelian cherry, the central section of the Conservatory Garden is a symmetrical lawn outlined in clipped yew, with a single central fountain jet at the rear. It is flanked by twin aisles of crabapples and backed by a curved wisteria pergola against the steep natural slope, that is dominated at its skyline by a giant American Sycamore. Otherwise there is no flower color; instead on any fine Saturday afternoon in June, it is a scene of photography sessions for colorful wedding parties for which limousines pull up in rows on Fifth Avenue. 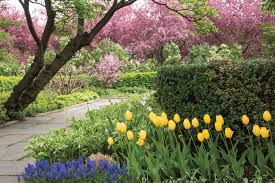 The Cherry Trees at the gardens

To the left of the south side is the garden of mixed herbaceous borders in wide concentric bands around The Secret Garden water lily pool, dedicated in 1936 to the memory of Frances Hodgson Burnett with sculpture by Bessie Potter Vonnoh. Some large shrubs, like tree lilac, magnolias, buddleias and Cornus alba ‘elegantissima’ provide vertical structure and offer light shade to offset the sunny locations, planted by Lynden Miller with a wide range of hardy perennials and decorative grasses, intermixed with annuals planted to seem naturalized. This  garden has seasonal features to draw visitors from April through October.

To the right of the central formal plat is a garden also in concentric circles, round the Untermyer Fountain, which was donated by the family of Samuel Untermyer in 1947. The bronze figures, Three Dancing Maidens by Walter Schott (1861-1938) were executed in Germany about 1910 and formed a fountain at Utermyer’s estate “Greystone” in Yonkers, New York.

This section of the Conservatory Garden has two dramatic seasons of massed display of tulips in the spring and Korean chrysanthemums in the fall. Beds of satolina clipped in knotted designs with contrasting bronze-leaved bedding begonias surround the fountain and four rose arbor gates are planted with reblooming ‘Silver Moon’ and ‘Betty Prior’ roses.

After the Second World War the garden had become neglected and by the 1970’s became a wasteland. It was restored and partially replanted under the direction of horticulturist and urban landscape designer Lyden Miller to reopen in June 1987. The overgrown, top-heavy crabapples were freed of watershoots and pruned up to a higher scaffold for better form. The high-style mixed planting was the first to bring estate garden style to urban parks, part of the general of Central Park under Elizabeth Barlow Rogers of the Central Park Conservancy.

(This information directly from Wikipedia and has many sources)