The Somers Point Historical Society started in 1987 as part of the “Save City Hall” campaign to save the historic City Hall building. The plan was to highlight the history of Somers Point and its place in the community and to save some of the older buildings in the town.

The City Hall was saved and it was renovated for the new library. The organization was also helped with funding and applying for National Historic Recognition for the Bayfront Historic District that lies between Shore Drive and Bay Avenue on the waterfront district of the town (Somers Point Historical Society website).

The building that the society is housed in was originally a Baptist Church that was built in 1886 and later became the Somers Point Library. When the new library was built, the Society bought the building and the organization was formed. The museum started with about 600 artifacts and it has grown much largers since.

Richard Somers and the Intrepid video

Display on items from the USS Somers plus ships and boats

The number of items in the collection includes weapons, dishes, photographs, nautical items and pictures of all the Navy vessels named after Richard Somers. These historical items show the contribution that Richard Somers made to the armed forces of the United States. There were also family hierlooms among the artifacts. It was told to me there will always be a USS Somers in service dedicated to him.

More items from the USS Somers

There was a nice display on the trolley car system that used to line the shore traveling from Atlantic City down the coast to Somers Point. This was a picture taken during the holiday season when shopping at the shore was pleasant experience.

Christmas shopping at the shore must have been fun

When the Lindenwood Historical Society folded for business, the Society inherited their impressive collection of ship models. There are all sorts of styles and designs of ships that line the entire room. There is very interesting display of clamming and shellfish harvesting equipment that is on display along with period clothing. It really showed how much shellfish production has not changed much over the years. There was an extensive display of shipbuilding materials showing the town’s shipbuilding yards and production that used to be part of the town’s businesses.

There is also a very extensive theater and arts program that is part of the town’s past and current social life. Being so close to Ocean City, NJ and its most famous summer resident, Grace Kelly there is a strong sense of theater and the arts around the community.

The theater playbills and items dealing with the local ‘arts’ scene.

The one thing that the historical society helps you remember that this is still a shore community and tourism plays a huge role in the history and make up of the town. You can see by the artifacts that things are geared towards the water and the extensive shipbuilding and fishing industries.

The Society also runs all sorts of fundraisers, movie nights and car shows to help raise money for the Society and does a lot of outreach to the community.

It is a fascinating look into the past of the shore community of Somers Point, NJ.

I had a busy Halloween weekend with the Michigan State versus Michigan game and a Gotham City Ghost tour in the afternoon. Halloween searching for ghosts.

Please print this guide to haunted sites of Lower Manhattan and have a nice afternoon walking around. It is a nice tour!

What I love about the Morgan Library & Museum is the level of sophistication and quality of their exhibitions. The museum really makes you think when you tour their galleries and attend their lectures and gallery talks. Their docents and curators bring an exhibition to a whole new level. I always feel like I am taking a college course and will be graded afterwards. They really make you think about the work or what the author or artist is trying to say.

Two of my favorite exhibitions were the “150th Anniversary Celebration of Alice in Wonderland”, which is why I joined the Morgan Library & Museum. I loved the novel and I wanted to get some ideas for our library’s own celebration. They had the original manuscript written by Lewis Carroll, some original prints and memorabilia from various times including posters, books, artwork and decorative items.

Another wonderful and interesting exhibition was on Mary Shelley’s “Frankenstein” which was a celebration of her life, her works and of the novel through the ages in both context of the novel and in Hollywood. There were various copies of the books in the exhibition as well as the history of the author’s life.

Another exhibition that was very interesting was the recent American artist Al Taylor with an showing of his drawings. The works were unusual but really stood out was his time in Hawaii and the drawings that inspired him.

The recent David Hockney Exhibition that I missed

It is nice to walk among the permanent collection of prints in the lower level and to visit the former private areas of Mr. Morgan’s home. It adds to who he was as a financier and as a homeowner. The home was not as elaborate as you would have thought.

I also enjoy the Morgan Cafe on the main level of the museum in the courtyard area of the first floor. The food is a little pricey and a limited menu but the service is wonderful and the quality of the food is very good. You will enjoy the meal and I have heard from other patrons that the Afternoon Tea is very nice as well.

They also have a Dining Room in the Library area that I have heard is very nice as well.

They have a nice selection of books, cards and gifts in their Gift Shop just beyond The Morgan Dining Room. I really like their selections at the holidays and their theme books to the exhibitions especially for the “Alice in Wonderland” exhibition.

It is a nice place to take a gallery talk, then a light lunch in the main hall and then a lecture at night. It’s a great way to spend the day.

The History of the Morgan Library & Museum:

The Museum is a complex of buildings in the heart of New York City and began as the private library of financier Pierpont Morgan, one of the preeminent collectors and cultural benefactors in the United States. As early as 1890, Mr. Morgan had begun to assemble a collection of illuminated, literary and historical manuscripts, early printed books and old master drawings and prints.

Mr. Morgan’s library was built between 1902 and 1906 adjacent to his New York residence at Madison Avenue and 36th Street. Designed by Charles McKim of the architectural firm McKim, Mead & White, the library was intended as something more than a repository of rare materials. Majestic in appearance yet intimate in scale, the structure was to reflect the nature and stature of its holdings.

The result was an Italian Renaissance-style palazzo with three magnificent rooms epitomizing America’s Age of Elegance. Completed three years before McKim’s death, it is considered by many to be his masterpiece. In 1924, eleven years after Mr. Morgan’s passing, his son, J.P. Morgan Jr., known as Jack, realized that the library had become too important to remain in private hands. It what constituted one of the most momentous cultural gifts in the United States history. He fulfilled his father’s dream of making the library and its treasures available to scholars and the public alike by transforming it into a public institution.

Over the years, through purchases and generous gifts, The Morgan Library & Museum has continued to acquire rare materials as well as important music manuscripts, early children’s books, Americana and materials from the twentieth century. Without loosing its decidedly domestic feeling, the Morgan also has expanded its physical space considerably.

In 1928, the Annex building was erected on the corner of Madison Avenue and 36th Street, replacing Pierpont Morgan’s residence. The Annex connected to the original McKim library by means of a gallery. In 1988, Jack Morgan’s former residence, a mid-nineteenth century brownstone on Madison Avenue and 37th Street was added to the complex. The 1991 garden court was constructed as a means to unite the various elements of the Morgan campus.

The largest expansion in the Morgan’s history, adding 75,000 sq ft to the campus was completed in 2006. Designed by Pritzker Prize winning architect Renzo Piano, the project increases exhibition space by more than fifty percent and adds more important visitor amenities, including a new performance hall, a welcoming entrance on Madison Avenue, a new cafe and a new restaurant, a shop, a new reading room and collections storage. Piano’s design integrates the Morgan’s three historical buildings with three new modestly scaled steel and glass pavilions. A soaring central court connects the buildings and serves as a gathering place for visitors in the spirit of an Italian piazza.

The mission of The Morgan Library & Museum is to preserve, build, study, present and interpret a collection of extraordinary quality, in order to stimulate enjoyment, excite the imagination, advance learning and nurture creativity.

A global institution, focused on the European and American traditions, the Morgan houses one of the world’s foremost collections of manuscripts, rare books, music, drawings and ancient and other works of art. These holdings, which represent the legacy of Pierpont Morgan and numerous later benefactors, comprise a unique and dynamic record of civilization as well as an incomparable repository of ideas and of the creative process.

Fee: Free to Individuals/Donations welcome-Groups tours are $100.00 for up to five people with an additional $15.00 fee per person. There is also an administration fee of $25.00 for groups over 20 people.

This beautiful brownstone was built as a wedding present to Franklin Delano Roosevelt and his wife, Eleanor and their future family by his mother Sara Delano Roosevelt. It was their New York City residence until they moved to the White House. His mother continued to use the house until her death in 1941 when the home was sold to Hunter College.

Tours are available when the building is open (Hunter College is currently closed) and you can tour the whole house. The home was listed on the National Register of Historic Places in 1980.

The Neo-Georgian townhouse was designed by architect Charles A. Platt for Sara Ann Delano Roosevelt in 1907. It originally held “two mirror-image residences with a single facade and entrance. Each floor had its own front reception room with a welcoming fireplace. Rear parlous could be combined through sliding doors 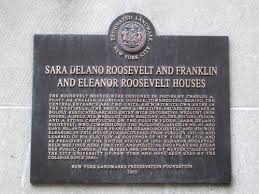 After his mother’s death in 1941, President Roosevelt and his wife placed the house up for sale and a non-profit consortium was organized to purchase the house on behalf of Hunter College. 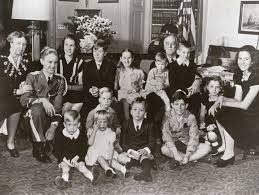 The inside of the house’s museum

(Disclaimer: This information was from Wiki and I give them full credit for the History of the Roosevelt House).

The History of the House:

This is a text widget, which allows you to add text or HTML to your sidebar. You can use them to display text, links, images, HTML, or a combination of these. Edit them in the Widget section of the Customizer.
Visiting a Museum: The Unique, Unusual, Obscure and Historical
Start a Blog at WordPress.com.
Loading Comments...
%d bloggers like this: