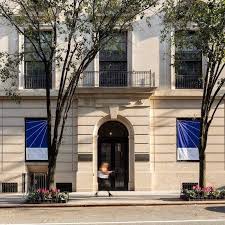 Institute for the Study of the Ancient World/New York University

I just happened to stumble across this museum on the way back from the Metropolitan Museum of Art and saw that they were having an exhibition entitled “A Wonder to Behold: Craftsmanship and the Creation of Babylon’s Ishtar Gate”. The exhibition is on the craftsman who created the ‘Ishtar Gate’ and the ‘Processional Way’ in the Ancient City of Babylon.

The small exhibition contains many examples of clay bricks that were used to build the decorative walls and pathways, artwork from the ‘Processional Way’ were displayed as well as smaller decorative art pieces from the time period.

Some of the works in the exhibition

The exhibition also showed tablets from the time period, information on the digs on the site of Babylon and some of the recorded history of the civilization.

There are interesting tablets on display

For two small rooms of gallery space, the Institute for the Study of the Ancient World covers a lot of information on the time period. One nice thing about the museum is that you can see the whole exhibit in less than an hour and they do have a very nice gift shop.

The History of the Museum:

The Institute for the Study of the Ancient World is a center for advanced scholarly research and graduate education, which aims to encourage particularly the study of the economic, religious, political and cultural connections between ancient civilizations. It offers both doctoral and postdoctoral programs with the aim of training a new generation of scholars who will enter the global academic community and become intellectual leaders.

In effort to embrace a truly inclusive geographical scope while maintaining continuity and coherence, the Institute focuses on the shared and overlapping periods in the development of cultures and civilizations around the Mediterranean basin and across central Asia to the Pacific Ocean. The approaches of anthropology, archaeology, geography, geology, history, economics, sociology, art history, digital humanities and the history of science and technology are as integral to the enterprise as the study of texts, philosophy and the analysis of artifacts. The Institute’s Director and permanent faculty determine particular directions of research but both historical connections and patterns as well as socially illuminating comparisons will always be central to its mission.

The public presence matches its vision, engaging both the public and scholars worldwide in the work and findings of its scholarly community. Exhibitions, public lectures, publications, digital resources and other programs reflect the Institute’s ideal of study that bridges disciplines and ancient peoples.

The creation of the Institute for the Study of the Ancient World at New York University has its roots in the passion that Shelby White and Leon Levy had for the art and history of the ancient world, which led them to envision an Institute that would offer an unshuttered view of antiquity across vast stretches of time and place. It was founded in 2006 with funding from the Leon Levy Foundation.

Areas of specialty among the museum’s faculty include the Greco-Roman world, the Ancient Near East, Egypt, Central Asia and the Silk Road, East Asian art and archaeology, Late Antiquity and the early Middle Ages, ancient science and digital humanities.

Disclaimer: This information was taken from the museum’s website and I give them full credit for it.