I visited the Jewish Museum for the first time this week to see the Leonard Cohen exhibition which had gotten good review online ( I had never heard of him before). It was a combination of video and pictures. The videos were on concerts, interviews, poetry readings and documentaries on his life. 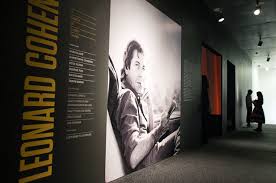 After seeing his videos on each floor, which was nice because there were bean bags all over the galleries, I visited the other galleries. There was an gallery dedicated to Jewish religious symbols, Contemporary Jewish Artists and items by Jewish craftsman.

The one gallery that I thought was quite amusing was the depictions of Jews on TV and how stereotypes play a role in comedy. It had everyone in the gallery laughing their heads off. It is good when you can laugh at yourself.

There is some interesting silver works from the Eighteen century on exhibition and the contemporary works were very lively. The museum is not that big so you can visit all the galleries in one afternoon. There is also a branch of Russ & Daughters in the basement level that is very popular with visitors.

The music gallery of the Leonard Cohen exhibition

History of the Jewish Museum:

The Collection that seeded the museum began with a gift of Jewish ceremonial art objects from Judge Mayer Sulzberger to the Jewish Theological Seminary of America on January 20, 1904, where it was housed in the seminary’s library. The collection was moved in 1931, with the Seminary to 122nd Street and Broadway. The Jewish Theological received over 400 Jewish ceremonial items and created. The Museum of Jewish Ceremonial Objects’, previously the Jacob Schiff Library. The collection was subsequently expanded by major donation from Hadji Ephrain Benquiat and Harry G. Friedman. In 1939, in light of WWII, Poland sent about 350 objects to New York City from homes and synagogues in order to preserve them.

Following Felix Warburg’s death in 1937, in January 1944 his widow Frieda donated the family mansion to the seminary as a permanent home for the museum and the site opened to the public as “The Jewish Museum” in May 1947. Frieda Warburg said at the opening that the museum would not be a somber memorial but rather a celebration of the Jewish faith and traditions. The first expansive of the museum was the addition of a sculpture garden in 1959 by Adam List. The building was expanded in 1963 and further by architect Kevin Roche in 1993.

In the 1960’s, the museum took a more active role in the general world of contemporary art with exhibitions such as Primary Structures, which helped to launch the Minimalist art movement. In the decades since, the museum has had a renewed focus on Jewish culture and Jewish artists. From 1990 through 1993, director Joan Rosenbaum led the project to renovate and expand the building and carry out the museum’s first major capital campaign of sixty million. The project designed by architect Kevin Roche, doubled the side of the museum, providing it with a seven story addition. In 1992, the Jewish Museum and the Film Society of Lincoln Center teamed up to create the New York Jewish Film Festival, which presents narrative features, short films and documentaries.

Today, the museum also provides educational programs for adults and families organizing concerts, films, symposiums and lectures related to its exhibitions. In 2011, the museum named Claudia Gould as its new director. 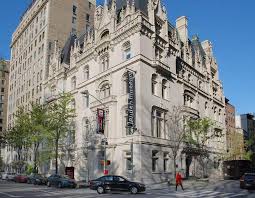 Felix M. Warburg House  was constructed in Francois I style in 1906-1908 for Felix and Frieda Warburg, designed by C.P.H. Gilbert. Francois I style was originally found in New York City in the late 19th century through the works of Richard Morris Hunt. Hunt was a renowned architect throughout the Northeast, particularly in New England and was one of the first American architects to study at the elite Ecole des Beaux-Arts in Paris.

The original house is built in limestone with mansard roofs, dripping moldings and gables. This architectural style was based on French revivalism and exuded wealth, a point which Felix Warburg wanted to make to his neighbors. It featured a green yard in front of the house, which was later converted into the museum’s entrance.

Disclaimer: This information was taken from the Wiki story on The Jewish Museum and I give the site full credit for it.)