The Grant Memorial was designed by architect John Duncan. Rising to an imposing 150 feet from the bluff overlooking the Hudson River, it took 12 years to build and remains the largest mausoleum in North America. Its  great size was meant to express the profound admiration Americans felt for the Civil War commander and was propelled to the forefront of America’s pantheon of heroes and declared the equal of George Washington and Abraham Lincoln. 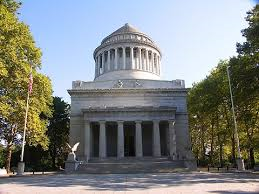 Spearheaded by the Grant Monument Association, some 90,000 people from around the United States and the world donated over $600,000 to construct the memorial, the largest public fundraising effort up to that time. Initial fundraising was led by Richard T. Greener, first black graduate of Harvard and a Grant supporter who credited the general with his advancement. Many African Americans contributed to the building fund.

Among the most Revered of Men:

This large classically proportioned mausoleum honors the Civil War general who saved the nation from dissolution and the president who worked to usher in a new era of peace and equality for all Americans. Ulysses S. Grant, a plain-spoken unassuming man who studiously avoided pomp and ceremony had volunteered his services for the Union effort when the Civil War erupted in 1861. In doing what he considered simply his duty, he emerged after four years of fighting as one of the great military leaders in history. Aggressiveness, speed, tenacity and the ability to adjust his plans in the face of unexpected impediments all helped to bring him victory.

As great as he was in war, Grant showed magnanimity and compassion in peace. He granted humane and generous terms when General Robert E. Lee surrendered to him on April 9, 1865 at Appomattox Court House. As president he pardoned many former Confederate leaders at the same time insisting on protecting the full political equality of former slaves. He was also concerned that American Indian tribes be treated with dignity  and respect. His fundamental desire for peace was reflected in his efforts to solve international disputes by arbitration rather than by threat of war. At the time of his death in 1885. Grant was universally respected by northerners and southerners alike.

Because of Grant’s status as a national hero, most Americans assumed he would be buried in Washington DC but his family preferred New York City. Grant himself had no strong preference; his only desire was for his wife, Julia to be buried next to him. The funeral on August 8, 1885 was one of the most spectacular events New York had ever seen. Buildings all over the city were draped in black. An estimated one million people crowded sidewalks, filled windows, stood on rooftops and climbed trees and telephone poles for a view of the procession, which stretched seven miles and took  five hours to pass.

The resting place for General Grant and his wife

Grant’s remains were placed in a temporary vault until an appropriate memorial could be funded and built. On April 27, 1897, the 75th anniversary of Grant’s birth, thousands of people, including diplomats from 26 countries, attended the dedication ceremony for the completed memorial. The dedication parade, led by President William McKinley, was almost as large as Grant’s funeral parade. Julia Grant reviewed the ceremony sitting next to President McKinley. She was laid by her husband’s side after her death in 1902. 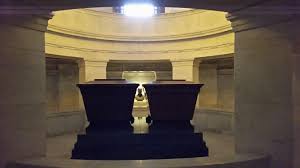 The Tomb of General Grant and his wife

The tomb is located in Riverside Park near Columbia University and across the street from Sakura Park, where Japanese Cherry trees are in bloom every Spring. Near the tomb is the memorial to the ‘Amicable Child’ and that should not be missed as well.

Disclaimer: This information was taken directly from the National Park Service pamphlet. This is a very interesting National Memorial and should not be missed. It is opened at certain times of the week, so please look for the posted hours. (The memorial is open from 9:00am to 5:00pm daily. For more information or to arrange for groups visits, please call (212) 666-1640).