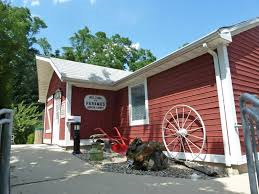 I visited The Fritz Behnke Historical Museum of Paramus, NJ the other day after  passing it for many years and found a smaller museum that told the history of Paramus, NJ. It has interesting displays on the agricultural past of the County of Bergen. Fred Behnke, the founder’s son, took me on the tour of his father’s masterpiece and I found the displays to be interesting and engaging. He showed me equipment that had been in his family for generations and some of the Indian artifacts that his family had found on the property which gave more depth to the history of the property as it had been farmed by local Native American tribes. 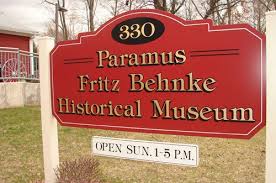 Take the time to visit the basement and watch their history video. It is very interesting short on the history of the museum and the borough of Paramus. If you are from Bergen County and grew up here in the 70’s and 80’s, you will recognize a lot of the changes that have happened over the last forty years. It is a real reflection on the changes of Bergen County, NJ over the last 100 years. The museum is only open on Sunday’s so plan accordingly.

The Fritz Behnke Historical Museum contains 2 floors of artifacts dating back to the early 1900’s when there were many farms in the Bergen County area.

The main floor had an exhibit of Police and Fire Department memorabilia, an being the exhibit displaying  the history of Bergen Pines County Hospital and a display of an old school room. There is an area showing household cleaning and laundry items, including one of the first electric washing machines, a duplicate of which is at the Smithsonian Museum. The kitchen area displays many old devices, used in cooking and includes an old ice box and a wood-burning stove as well as a early gas stove. The Kids Room contains many old toys such as strap-on ice and roller skates, dolls, doll houses and cast metal farm tractors. In the parlor area there are old wind up phonographs and a church organ. In the corridors there are many photographs showing the Paramus of yesteryear.

The history of Paramus, NJ is explained at the museum

On the lower lever is an interesting 12-minute video presentations on the history of Paramus. There are also displays of woodworking, blacksmithing and farming. The farm display depicts the two distinct differences in Paramus farming that of the celery farms in the muck soil on the west side of town and vegetable farms in the brown soil on the east side of town. There are many different farming items displayed including an egg sorting machine and a shovel hand carved from one piece of wood.

From Highway 17 & 4 proceed west on Route 4 approximately 1 mile to Paramus Road. Exit toward Ridgewood. Continue north through the traffic light. Pass a cemetery and a golf course. The museum is next on the right.

Special Notes in History provided by the museum:

The History of Sprout Brook: Long before Route 17 was built through the center of Paramus, Sprout Brook also ran north to south through meadows and woodland, which abounded with wildlife. Beginning in the northwest, it rambled through the rich black soil or ‘muck’ that had once been a lake bottom. As farmers discovered the rich soil, they dug ditches off the brook to irrigate their celery farms. At that time, Paramus was nationally known for its celery farm production. As the water flowed southeast, it bordered on higher ground called ‘upland’, which was also fertile soil conducive to growing a variety of vegetables like corn, tomatoes and cabbage.

In the early Spring, the farmers planted their seed in greenhouses and waited until the last frost passed. The plants were then transported outside to the filed where they were cultivated and watered until they became mature enough to harvest. Produce was taken by horse and wagon and later by truck crossing the Hudson river via ferry board to the markets in New York City. After all the produce was sold, they returned home late in the evening only to rise early the next morning to begin preparing the vegetables to take to market that night. It was a ‘family affair’ and farmers often helped each other with their harvests when extra hands were needed.

History of the Lenape Indians: The Indians of Bergen County, the Lenni Lenape Indians settled in the area for many reasons. The climate was ideal all year so they could survive during the winter months. Also the Ramapo Mountains made an ideal place to live. The shale rock overhangs were like caves that provided protection from the weather. There was abundant water in the area from the Hackensack and Saddle Rivers, Sprout Brook and many ponds that provided good fishing and navigation.

The wild animals in the area came to drink at these waterways thus providing great opportunities fro hunting. The land was also fertile, which made for good farming such as corn (or Maize) and other root crops. These crops attracted many birds such as quail, pheasant and of course, the wild turkey which hare still in the area today.

Our early settlers traded with the Indians. Mrs. Lawrence, the one room school teacher was of Indian descent. As the early farmers in the area plowed their fields, they found arrowheads, tomahawks and grinding stones. The Lenni Lenape called this area “Perapepus”, which meant rich or fertile land. Through the years, the name changed several times until it became Paramus.

The museum also has the history of the Paramus Fire and Police Departments as well as the early Bergen Pines Hospital.

*This little gem of a museum is only open one day a week but can be opened to accommodate groups so please call the museum for details. The museum is free to the public but please leave a donation to help with the costs of the museum. It is well worth the trip if you like the history early farming communities or want the know the history of Bergen County.