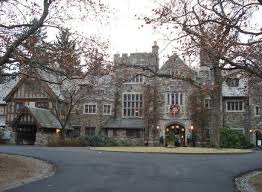 Note: The Skylands Manor is decorated for the holidays during the first week of December and only for one weekend as it used for a banquet facility the rest of the time and as a hotel. The first weekend of December is when local Gardening groups are assigned one room to decorate and they have one week to put it together, display their ideas and explain how they did it to the public. The best day to go is the Thursday afternoon opening as it is the quietest day of the four day event with Saturday being the busiest.

Each of the eleven rooms that were decorated for the event were amazing each with their own decor, docents and gardeners and theme to the room. The Entrance Hall was elegant with its garland and potted plants, the Octagon Hall used its space wisely with a series of trees and hot house flowers. The women who decorated it had a phenomenal sense of space.

The Teaneck Garden Club did a great job decorating the Library with an elegant Christmas Tree and vintage ornaments. Some of the gardeners also came in vintage clothing of the area.

Each room had its own personality and was a combination of Christmas decorations and holiday plants.

In 2019, the decorations were not as elaborate as the previous two years. The snow storm before the event may have put a damper on a few of the groups decorating. Still the best day to visit the manor is Thursday afternoon as it is the quietest time and you can take the best pictures.

The two best rooms in the manor in 2019 were the Entrance Hall and Grand Staircase decorated by the Magnificent Seven, a group of volunteers whose theme was ‘The Secret Life of Gnomes’ and the trees and staircases were studded with gnomes, large and small, on the trees and wreathes surrounding the stairs.

The other room that was very impressive was the Center Hall whose theme was the “Enchanted Forest, full of little fairies and painted rocks and jeweled winged ornaments. When you looked at the detail work of the trees and table displays you could see the work that went into the decor. Each little fairy on the stands and trees had immense detail and took a lot of time. This display was done by the Friends of Laurelwood Arboretum in Wayne, NJ. 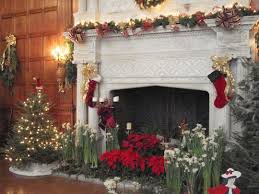 The rest of the rooms in the manor were really pared down from 2018 and did not have the same elaborate details to them. The Library and Study did not have half of the display items that they did in the past.

The fee to enter the home is still $10.00. The carriage house is being used for a cafe with Chicken Salad sandwiches and hot dogs with toppings. There are all sorts of crafts for sale.

Watch the calendar for 2020 in early December for the next display.

History of the Skylands Manor & People:

Clarence McKenzie Lewis bought Skylands in 1922 from the estate of Francis Lynde Stetson, who founded Skylands in 1891. Mr. Lewis was educated in England and Germany. While he was there, his widowed mother, Helen Forbes Lewis married William Salomon, founder of the New York banking house. Upon his return, Lewis attended Columbia University, where he received a Civil Engineering degree in 1898. In 1908, he married and bought a country place in Mahwah; it was there that Lewis became interested in horticulture.

Helen Lewis Salomon, the mother of Clarence Lewis, was widowed in 1919. Not only thereafter, she and her bereaved son agreed to a joint project; she wanted a Tudor-style showplace; he wanted plants and gardens. Mrs. Salomon worked closely with the architect on Skylands Manor but she died in 1927 before its completion.

John Russell Pope (1874-1937) “an architect born to work, in the grand style” was educated at City College, Columbia University, the American Academy in Rome and the Ecole des Beaux Arts in Paris. He trained under Bruce Price, the master builder of Tuxedo Park. Pope designed many outstanding public buildings, such as the Jefferson Memorial and the National Gallery of Art.

Tutor Architecture originated in England in the late Gothic period and continued to be popular into the Renaissance. It features half-timbering on the exterior, crenelated walls, large groups of rectangular windows, oriel or bay windows and intricate chimney complexes The interiors usually had large central halls, wood paneling, molded plaster ceilings and elaborately carved staircases. Tudor Revival became a popular style for the elegant country houses of wealthy Americans.

The builder of Skylands was the Elliot C. Brown Co., of New York City, which also built the country homes of Franklin Delano Roosevelt at Hyde Park and E. Roland Harriman (Arden House).

Native Granite for the exterior walls of Skylands was quarried at Pierson Ridge above Emerald Pond in the eastern part of the property in Bergen County.

Disclaimer: This information on the details of the history of Skylands Manor was taken directly from their pamphlet and I give them full credit for it. Please call the manor for times that it is open as it is used a banquet/catering facility and a B & B.