I recently spent my afternoon at the Senate House and Museum in Kingston, NY taking a tour of the museum and the House next door. The Senate House itself is being renovated and repaired and will not be open until next year. It was a quiet afternoon and I was the only patron for most of the afternoon. The grounds were full of beautiful foliage and fall flowers so it was nice to walk around the grounds.

The Senate House itself was closed for the renovation but you could see in the windows and there was not much going on inside the house. There was furniture here and there and the roof really needed work. There is not much too see at the house itself but the grounds are very pretty and well-landscaped. The house was built for merchant Abraham Van Gaasbeek and his family. It stayed in the family for generations. 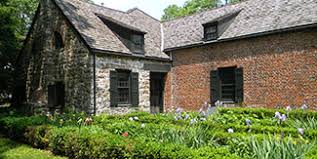 The Senate House Museum is broken into three sections. The right side of the museum is is the history of the City of Kingston and the matching artifacts. There is a description of manufacturing, merchant class and its military prominence. The left side of the museum is dedicated to the locally born artist, John Vanderlyn. His paintings line the walls of the museum of the artist at different stages of his career. His work was ahead of its time for the area and it was noted in the collection that he forced himself to commission portraits to survive. His works advanced for the time because of his studying abroad now line the walls of the best museums in the country.

The second floor holds the furniture that is not historically correct with the Senate House and comes from different time periods. There is furniture, beds and chairs, spinning wheels, chamber pots and all sorts of accessories for the home.

Artifacts from the past are displayed here

The Loughran House next door houses more of the furniture of the house and has a new exhibition “Back to the Future: The Evolution of Senate House”. This houses artifacts from the house.

History of the Senate House:

Amidst the turmoil of a British military invasion in the fall of 1777, the elected representations of rebellious New Yorkers met in Kingston to form a new state government. While convened in Kingston in September and October, New York’s first Senate met in the simple stone house of merchant Abraham Van Gaasbeek.

In 1887, to recognize Senate House’s role in the formation of New York State, New York State acquired the property, which quickly became a vital community museum. A two-story Museum Building was constructed in 1927 to house and display the site’s burgeoning collection. Among its treasures are: major works by John Vanderlyn and other members of the Vanderlyn family of Kingston. The museum also includes the site’s popular new exhibit: “Kingston Stockage: New Netherlands’ Third City,” discussing Kingston’s early history.

The Kingston Stockade: The City’s formation from the beginning