The Boonton Historical Society and Museum

I recently visited the Boonton Historical Society on the Main Street of downtown Boonton, NJ in a quickly changing new Arts Community. Up the hill, several galleries have found a home and the downtown is filling up with cottage industries catering to both locals and artists.

The Historical Society covers the history of Boonton and its role in New Jersey history especially with the creation of the Morris Canal and the Iron works that once dominated the area until about WWI. 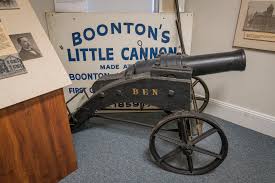 The munitions of the town’s foundries

The town saw much prosperity during the Civil War, providing ammunition and supplies to the Union Army. Many of the nails used during this period came their foundries. They also supplied munitions, pails, building materials and the transportation of raw iron out of the town. When technology and the way we build changed, the businesses here started to dry up. The use of the Train system and major highways also changed the transportation, it affected the town’s businesses.

Still the Boonton area is home to many historic homes, a section of the Morris Canal and the remains of the iron works that burnt to the ground decades ago. There is an interesting exhibition of the town’s Police Department in the lower level and now as part of the changing gallery space an extensive exhibition on the NJ Trolley system that once dominated the state. 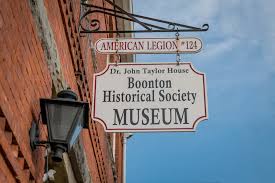 The Boonton Historical Society and Museum

The permanent exhibition space studies the history of the town, telling the story of the town’s beginnings as a manufacturing town, growth of the canals and shipping and agriculture to its current destination as a Arts Community. The museum is small and can be seen in about an hour to two hours if you like to read.

Don’t miss the room to the right of the museum which covers the timeline of the town and its prominent residents. It tells the story of how the growth of the iron works, the building of the dam and the coming of the railroads and the trolley system changed the town and the growth of its population. Take time to read the displays and look at the exhibitions behind the case lines.

I recently went to the Boonton Historical Society for the December 2019 Holiday open House and it was a very nice afternoon. They some local students playing the guitar, keyboards and the flute with engaging music and holiday songs. There were some light refreshments with hot and cold appetizers and Christmas cookies. They had specials in their gift shops and featured ornaments, books and stuffed animals at a reasonable price and had 1960’s and 70’s Christmas albums playing on the lower level of the museum. It was a nice afternoon treat and the society did a nice job welcoming people.

The museum is only open once a week on Sundays from 1:00pm-4:00pm and is run by volunteers. If you want to see how the State of New Jersey grew from a series of small towns to bustling industrial areas to sleepy back towns and back, visiting the Boonton Historical Society and Museum is a must visit.

The History of Boonton, NJ

The Mission Statement of the Boonton Historical Society & Museum:

The Boonton Historical Society and Museum is a non-profit organization incorporation in 1959 located in the town of Boonton, New Jersey. Its mission is to:

*Preserved and protect the town of Boonton’s unique cultural, architectural and industrial history;

*Preserved and share the area’s rich history, folklore, arts and humanities of the past and present;

*Encourage preservation and restoration of historic landmarks in the town;

*Protect and display the museum’s collections;

The building was originally a private home built for Dr. John Taylor and his wife, Adelaide T. Kanouse. John L. Kanouse gave his daughter and her husband this lot as a Christmas present in 1897. Most likely, it was an enticement to get his family to move closer to him because they had been living in Succasunna and Mount Arlington where Dr. Taylor had practiced medicine for 15 years. The Taylor’s returned to Boonton and had the brick house built. Dr. Taylor continued his medical practice there.

In 1901, Adelaide’s parents came to live with them until her father died in 1905 and her mother in 1908. John L. Kanouse was one of Boonton’s most prominent citizens and was a successful businessman. He operated a food and supply store on Main Street, a coal yard on the Morris Canal and a modest farm between Kanouse and Roessler streets. He was elected Superintendent of Public Schools and held the office for twenty years. He served in the State Legislature and Board of Chosen Freeholder and as Associate Judge of Morris County and Tax Collector of Boonton.

Dr. Ellery Peck worked with Dr. Taylor in the building as an associate for seven years. Then in 1917, Dr. Peck went to serve in WWI and Dr. Taylor moved to Chula Vista, CA. After the war, the returning soldiers formed American Legion Post #124. Dr. Peck was one of the trustees of the Legion Post. He negotiated with the Taylor’s to purchase the building from the Post and dedicated it as a permanent memorial to veterans and a home for Post #124.

In 1922, the Town offices were moved from the Maxfield Fire House on Main Street to the John Taylor house. The Legion Post and the Town shared this building for 43 years until the present Town Hall was built in 1965. Since that time, the Boy Scouts, Civil Defense and Parking Authority have also used the building, having five floors there was enough room for everyone.

The Legion also offered space to the Boonton Historical Society. On November 11, 1980, the Society opened its museum on the second floor. This arrangement continued for ten years until Town Fathers deemed the building unsafe and it was closed to the public.

The building sat idle until the Committee to Save the John Taylor Building sought funding to renovate the building. That funding came from several sources. The largest portion came form a state grant but there were also sizable donations from the American Legion Post #124 and the Boonton Historical Society. More money came from individuals who were interested in seeing this portion of Boonton’s history kept alive and retained by the Town. The renovations were completed by professional tradesman and a few tireless volunteers. The building reopened in May 1997.

The original building had two triangler dormers on the top floor and a porch at the back of the main floor. They were removed sometime during the 1960’s. That work did solve the problem of a leaking roof but unfortunately, it made the building ineligible for designation to the historic register. Another mistake was made when the building was painted to solve the problem of leaking bricks. That mistake was undone when a civic group, Boonton’s United Community Effort, held a raffle to earn money to have the paint chemically removed and the bricks repointed.

Disclaimer: This information was taken from the Boonton Historical Society pamphlet and I give them full credit for the information.

One thought on “The Boonton Historical Society and Museum 210 Main Street Boonton, NJ 07005”