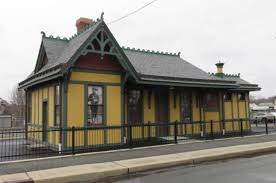 The Museum is open one Sunday afternoon a month and for special events only.

I visited the Waldwick Museum of Local History during the Northwest Bergen History Coalition 8th Annual History Day for their exhibition, “How Immigration & the Railroad Shaped our Towns”. They currently have an exhibition on the “100th Anniversary of Waldwick”. The Waldwick Museum is in the restored 1887 Railroad Station, which has served the town of Waldwick and the surrounding towns.

The Museum is has been planned for years and the restoration was spearheaded by Doug Cowie, the Vice-President of the Waldwick Community Alliance, who at the ribbon cutting ceremony at the opening on May 22nd, 2016, thanked resident, Kay Williams. Ms. Williams formed the Waldwick Historical Society in 1977.

The town is celebrating their 100 Anniversary and the new exhibition at the museum reflects it with exhibitions and memorabilia from the town of Waldwick. The currently exhibition is broken down into sections.

The main part of the museum has the history of the town displayed including the schools, police and fire departments and town organizations. The history of the railroad service in town is displayed of how it developed and the how the town grew around the station. Since the town is celebrating its ‘100th Birthday’, there are all sorts of pictures of the town at various stages.

The museum is only open once a month so please check their website.

In a ‘Brief History of the Borough of Waldwick’, the timeline for the town is:

1840’s: The Railroad connecting Jersey City with Suffern is built and ran through Waldwick, then named New Prospect.

1886: An architectural Queen Anne Style depot is built. The depot is called ‘Waldwick’ meaning “Light in the Woods”. The depot brings more commerce to the area also called Orville Township.

1890: The Railroad Signal Tower is erected in a similar style as the Depot.

1919: The small railroad hamlet is incorporated as the Borough of Waldwick.

When I visited the museum that day, the theme of the day was how immigration had changed the suburbs and how the Town of Waldwick had a increase of Italian immigrants move into the town bringing their traditions with them and how it shaped the town.

They also had an extensive exhibition of the town’s railroad past with maps and pictures of the old railroads. The pictures are accompanied with memorabilia from the railroad era. There is also artifacts from the town in different eras on display.

The museum has limited hours and is run by volunteers. It is open one afternoon a month and for special events.

History of the Waldwick Train Station:

The Waldwick Railroad Station is one of the few extant frame terminal predating 1900 on the Erie Railroad line in New Jersey. Planned and built in 1887, the structure’s Queen Anne style is representative of the small suburban railroad depots erected throughout the United States in the last quarter of the 19th century. In 1996, the Station was named to the National Registry of Historic Places as well as the New Jersey Registry of Historic Places.

It also serves as home to the Waldwick Museum of Local History where exhibits commemorate life in the late 19th and the early 20th centuries and the impact that the railroad has had on the Borough of Waldwick and the surrounding area. The Waldwick Community Alliance (WCA) has complied a collection of hundreds of historical photographs and documents as well as artifacts from that time that are or will be on display. The WCA exhibits these historic artifacts along with others that are donated and collected.