I have been to the NY Aquarium many times since it reopened after Hurricane Sandy and there have been many positive improvements in both the facility and the service. The new Ocean Wonders: Shark! exhibition which has opened up giving an interesting look at the underwater world of the many different types of sharks that dominate the deep.

It is not just a display but also a commentary on the conditions of the deep and the treatment of sharks around the world. There contributions as bottom dwellers cleans our oceans and benefits other fish. It was shocking what the treatment is of these animals in Asia when strip these animals of their fins for soup. I like how professionally the aquarium shows this in their displays and videos and doesn’t preach but offer solutions to the problem. 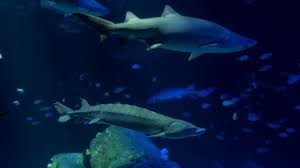 That and walking through the tanks themselves in the darkened rooms with music makes for a fascinating and almost ominous trip into the ocean behind the walls with the sharks and other mammals and fish swim past you. There is also a small tunnel that you can climb under to watch the fish swim on top of you and past you.

In the Conservation Hall, you will learn all about the fish that dominate and keep our reefs vibrant and what happens when pollution takes over and kills them. Again the aquarium displays this in a positive way, shows how the animals keep the reefs healthy. I point out that there are a lot of colorful fish on display and it is fun to watch the small children yell out to them. 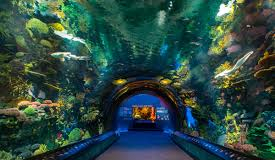 The underwater tunnels is amazing!

There is a wonderful seal show during the day that you should not miss especially in the warmer months when you can sit in the stands and watch them perform with their trainers. They are more Native New Yorkers than most humans having been born at the aquarium and showing their own pride in their home and abilities. 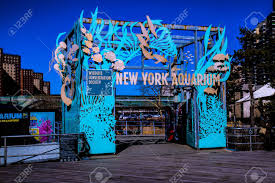 As part of the new building there are also several new eating establishments at the aquarium including the new Oceanside Grill that I have not visited yet (it was closed on my last visit) as well as The New York Bite food truck (which was also not opened). The most impressive restaurant is the Oceanview Bites on the second floor of the Ocean Wonders building. This beautiful new restaurant has an interesting but somewhat routine menu with prices usual to an aquarium but offer the most spectacular views of the ocean and of Coney Island. Do not miss just walking up to the restaurant in the circular pathway for the views alone.

The NY Aquarium is a treat in of itself and a great excuse to visit Coney Island. Don’t miss the rest of the island’s amusements and museums while you are there.

History of the New York Aquarium:

The New York Aquarium is the oldest continually operating aquarium in the United States, having opened in Castle Garden in Battery Park in Manhattan in 1896. Since 1957, it has been located on the Reigelmann Boardwalk in Coney Island. The aquarium is operated by the Wildlife Conservation Society (WCS) as part of its integrated system of four zoos and one aquarium, most notably the Bronx Zoo. It is accredited by the Association of Zoos and Aquariums (AZA).

As part of the WCS, the aquarium’s mission is to save wildlife and wild places worldwide through science, conservation action, education and inspiring people to value nature.

The facility occupies 14 acres and boasts 266 species of aquatic wildlife. Its mission is to raise public awareness about issues facing the ocean and its inhabitants with special exhibitions, public events and research. The New York Seascape program, based out of the aquarium, is WCS’s local conservation program designed to restore healthy populations of marine species and protect New York waters, which are vital to the area’s economic and cultural vitality.

On June 6, 1957, the Aquarium opened at its new location in Coney Island. The new site of the New York Aquarium is the home of the WCS New York Seascape program, the society’s research and conservation program focusing on nearby rivers, harbor and ocean from Cape May, NJ to Montauk, Long Island.

The aquarium kept an orca briefly in 1968 and a narwhal in 1969. Both reportedly died of possible pneumonia. The aquarium’s beluga whales were transferred to the Georgia Aquarium in 2007 as part of a breeding program. In September 2011, the aquarium named its new electric eel Wattson and in March 2012, it launched a sea horse breeding program.

In October 2006, the New York Aquarium announced the finalists to a competition to develop a more inviting and visually prominent exterior for the aquarium. In March 2007, the winning design by firms WRT and Cloud 9 was selected, which featured an enclosure resembling a whale over the aquarium. However, in March 2008 that concept was scrapped due to concerns over a new exhibit based on sharks was announced. The massive 784,000 US gallon exhibition, Ocean Wonders: Sharks! was originally scheduled to break ground in November 2012 and open in 2015

. However, the New York Aquarium was significantly damaged by Hurricane Sandy in October 2012, which severely flooded the facility and shut down power. A small group of WCS staff who remained onsite during the hurricane were able to save 90% of the animals in the collection. As a result, the exhibition opened June 30, 2018, becoming the first major exhibition at the New York Aquarium to open after Hurricane Sandy.

Disclaimer: this history of the NY Aquarium is taken from Wiki and I give them full credit for this information.

The Coney Island Museum is an interesting place specializing in the history of Coney Island from the time of the Native American settlement to modern history. The history covers from the Dutch visiting the island for pleasure to the mid-1800’s and after the Civil War when time off and weekend pleasures became the rage.

The museum covers the history of the three great amusement parks, Steeplechase, Luna and Dreamland when they were all in their heyday until they all burned down or closed. This history includes the rise of Astroland and the current Luna Park.

There is loads of memorabilia from all ages and all sorts of novelties from the rides such as the hall of mirrors, bumper cars and old cars and carts. Postcards from different eras also give an interesting look of the past so take time to look at each one.

The history of some of the famous restaurants such as Child’s, Nathan’s and Feldman’s are discussed and their impact on the cuisine of Coney Island from the days of the clams to the revolution of the current hot dog.

Some of the exhibitions cover the development of the area as a pleasure seeking attraction and as a luxury resort for wearied New Yorkers. What started as hotel resort and racing capital developed into an amusement area for the thrill seeking and for those who were looking for an escape for fun. It shows the growth and enhancement of the City reflected into the development of Coney Island itself mirroring what is happening in the City currently.

The amusements and bumper cars

If you are interested in the history of Coney Island, then the Coney Island Museum is a nice was to spend the afternoon. There are tours daily and don’t forget to visit the Sideshow downstairs, which shows on the hour. The fee is $5.00.

The Mission of Coney Island USA:

Coney Island USA exists to defend the honor of America popular culture through innovative exhibitions and performances. Presenting and producing exciting new works, our approach is rooted in mass culture and the traditions of P.T. Barnum, dime museums, burlesque, circus sideshows, vaudeville and Coney Island itself. Preserving and championing a set of uniquely American visual and performing art  forms, we seek to create an international forum for cultural preservation and discourse and where Coney Island represents these impulses, we strive to make it once again a center for live art and entrepreneurial spirit (CIUSA).

The display of amusement offerings

Video on the Coney Island Museum

Disclaimer: This information on Coney Island USA was taken directly from their website. Don’t miss this wonderful piece of Coney Island history in one building and plan this as part of your trip to Coney Island along with the Cyclone, Nathan’s, the Wonder Wheel and the beach.