Please call in advance due to seasons and weather conditions

I enjoy coming up to Germantown to visit the Clermont Mansion at any time of the year especially at Christmas time. The old mansions of the Hudson River Valley show their real beauty at this time of the year.

The Clermont Library decorated for Christmas

Walking around Clermont is like walking through a history book. To think you are walking around the very rooms that family members who wrote the Declaration of Independence, were Governors and Ambassadors from our country and who owned most of Upstate New York lived is really incredible. The Livingston Family did so much for the United States in the formation of this country is a testament to the family.

The tour was wonderful because of the one on one conversation I had with my tour guide, Molly. We started in the entry hallway where the family hang many of the family portraits and the long hall lead to wonderful views of the Hudson River.

The next room decorated for the holidays was the Music/Withdrawing Room with more beautiful views of the river and a very interesting clock on the mantle that there are only two in the world. This clock represented the first balloon launch in France and this was the clock where the balloon went up. In France was the other clock with the balloon going down. I thought that was pretty interesting.

The Balloon Clock on the mantle decorated for Christmas

Our next stop was the Library which seemed very homey and relaxing. It looked like a room that a family would want to spend their time in after a long day. The windows faced the river and the formal gardens at that time and let in a lot of light. The room was decorated with a elegant tree and looked like the family was ready to walk in and join us for the holidays.

The Library of Clermont

Next it was off to the formal Dining Room where the portraits of Margaret Beekman Livingston (a VERY distant relative of mine by marriage) and her husband, Robert Livingston hung. She had saved these along with the grandfather clock before her first house was burned by the British during the war years. It was set for Christmas lunch when the family would dine together.

The Clermont Dining Room is very elegant at Christmas

We also toured where the food was prepared and prepped from the kitchen to the Dining Room, which was all done in organized fashion. I was told by the tour guide that for the most part the family lived her year round unlike some of the other mansions who only lived here during certain times of the season.

We took a walk upstairs to see the upstairs bedrooms and see where the third Mrs. Livingston lived. I thought it was interesting that she had two beds in her room in which neither was big enough to accommodate her.

Then it was back down to the formal hallway for the end of the tour. The one thing I have to say about Clermont is that it looks like someones home not some grand mansion like the Mills or Vanderbilt mansions that looked like they for a moment time or only for a season. This family lived here all the time.

I will have to come back to see the gardens in bloom during the Spring and Summer. 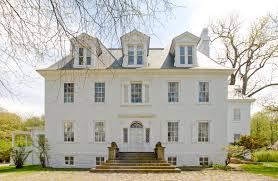 The home in all its beauty

The History of Clermont:

The name Clermont derives from “clear mountain” in French and was inspired by the view of the Catskill Mountains across the Hudson River from the estate.

The estate was established by Robert Livingston following the death of his father, the first Lord of the Manor was inherited by the eldest son, Philip Livingston, 13,000 acres in the southwest corner later named Clermont was willed to Robert. The original house was built around 1740.

Robert Livingston of Clermont died on June 27, 1775 and the estate passed to his son, Robert, who was known as ‘Judge Livingston’ to distinguish him from his father. Judge Livingston was a member of the New York General Assembly from 1759 to 1768, served as Judge of the admiralty court from 1760 to 1763 and was a delegate to the Stamp Act Congress of 1765. He married Margaret Beekman, daughter of Colonel Henry Beekman. Their son, Robert R. Livingston, later known as “Chancellor”, served on the committee that drafted the Declaration of Independence. Judge Robert died about six months after his father, on December 9, 1775.

In October 1777, British ships sailed upriver from New York City in support of General John Burgoyne who was north of Albany. That same force had already stormed two forts in the Hudson Highlands and burned Kingston, New York. Major General John Vaughan led a raiding party to Clermont and burned Livingston’s home because of the family’s role in the rebellion. Margaret Beekman Livingston rebuilt the family home between 1779 and 1782. Robert R. Livingston became the estate’s most prominent resident. Chancellor Livingston administered the oath of office to President General Washington, became Secretary of Foreign Affairs and negotiated the Louisiana Purchase.

He also partnered with Robert Fulton in 1807 to create the first commercially successful steamboat on the Hudson River, the North River Steamboat (later known as the Clermont) which stopped at the house on its inaugural trip.

The home’s final Livingston owners were John Henry Livingston and his wife, Alice. They added to the home and greatly valued the homes important historical role. The Livingston’s built second mansion on the property known as Arryl House, which burned down in 1909. The ruins of Arryl House are still visible at the south end of the property. Alice Livingston was responsible for creating many of the landscaped gardens that are continued to this day. Following John Henry’s death, Alice turned the Mansion and property over to the State of New York in 1962 so that all the people of New York could enjoy it.

The house is now a New York State Historic Site and was designated a United States National Historic landmark in 1972. It is a contributing property to another National Historic Landmark, the Hudson River Historic District. Although locate in the town of Clermont, its mailing address is in the nearby town of Germantown.

(This information is a combination from the Clermont Website and Wiki and I give them full credit for this information. Please check the website above for more information on the site and its activities through their Friends site.)