Washington Irving’s home, Sunnyside is open during the warmer months of the year, closing at the end of October. The house looks like a enchanted cottage with almost a fairy like appearance right on the banks of the Hudson River with the most spectacular views of the river valley and the Tappan Zee Bridge in the distance. 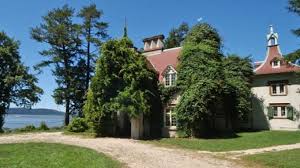 Sunnyside at the end of the summer

The house was designed by architect George Harvey and reflects the Dutch Colonial Revival, Scottish Gothic and Tudor Revival influences with wisteria growing up and around it and a jagged crow stepped gable.

When walking through the home, you will see the study where Washington Irving conducted the business of the house and did his writing. To the other side of the house, you will see the living room and small dining room where the family used to entertain. The upstairs contains small bedrooms where Washington Irving, his brother, Ebeneezer and his five nieces lived on and off when they were living at the house. Washington’s brother’s business had failed and the family came to live with him. Two of the nieces never married and ran the home for their uncle.

The bedroom at Sunnyside

The house is nicely furnished in the most modern decor of its time but is not an elaborate house. It is a home and not a weekend mansion and this ten acre estate was a once a  working farm. In the back of the house, there is an ice house and a barn show where the people who worked on the estate kept the house running.

The study of Washington Irving

The view of the river is one of the most spectacular in the Hudson River Valley as its at the widest part of the Hudson River. You can see the cliffs of New Jersey on the other side with views of Nyack and the Tappan Zee Bridge in the background.

During the Fall season there are all sorts of activities going on at the estate and the tours are a very interesting look at life at that time.

The History of Sunnyside:

The estate was once the home of Wolfert Acker called Wolfert’s Roost and was part of the Manor of Philipsburg and this home was once a simple two room stone tenant farmhouse built around 1690.

The property came into the hands of the Van Tassel family, who were married into the Eckert family and owned it until 1802. That year, 150 acres were deeded to the family of Benson Ferris, one time clerk of the Old Dutch Church of Sleepy Hollow, whose wife, Maria Acker, was a descendant of Wolfert Acker’s.

In 1832, Washington Irving visited his nephew, Oscar Irving, who lived near the old stone farmhouse and was looking for a home at the time. He purchased the property on June 7, 1835 and would add to the property.

Irving wrote a story, “Wolfert’s Roost”, about Acker and the site. In a letter to his brother Peter, he described it as “a beautiful spot, capable of being made a little paradise…I have had an architect up there and shall build upon the old mansion this summer. My idea is to make a little nookery somewhat in the Dutch style, quaint but unpretending. It will be of stone.” He asked his neighbor to help him remodel the house and landscape the grounds in Romantic style adding a brook and waterfall.

The house became a major spot of people visiting the area to meet the author. In 1842, he was appointed to be the Ambassador of Spain and left the estate in the care of his brother and four daughters. He returned in 1846 and added to the home the ‘Spanish Tower” in 1847. This added four more bedrooms to the home.

The house was purchased from Lousi Irving by John D. Rockefeller Jr. and was restored for historic preservation. It was opened to the public in 1947.