My review on TripAdvisor (Manor and Pumpkin Blaze):

A trip to the Van Cortlandt Manor in Croton-on-the-Hudson is an interesting step back into the Colonial history of this country. During the summer, there is an interesting walking tour of the home offered usually from the end of July to Labor Day. Then the house is closed to prepare for the huge ‘Pumpkin Blaze’ during the months of October and November and then the house is shut down until the spring.

The house tour is interesting because it shows the home as a working farm and place of commerce for the family. This was not a weekend home for the family working in the City but crops being grown for shipping, vibrant gardens that supplied the house and a small tavern for travelers along the Albany Post Road as well as a place for shipping goods down the rivers.

The home is furnished in the most modern furnishings of the time and you can see how the house reflected the needs of the family at that time. It was more of a home than a luxurious place to entertain. The furnishes are practical, very in fashion of the time and nicely decorated.

The tour of the kitchens and storage areas show that even in what was the modern era was not such easy living without servants. The estate was somewhat self-contained with animals and provisions being raised on the land and there is even an area where fabric such as flax and cotton where spun and made into clothing.

The upstairs bedrooms show that the linens were under lock and key even with the servants and that the rooms were well-appointed and comfortable. A lot of the family heirlooms still reside in the house and it gives you a perfect look at what life must have been like when the family lived here.

Don’t miss the gardens as well. Some have been over-grown because of the lack of volunteers but still you can see the beauty of the flowers and trees around the house. The house sits right on the cross between the Croton and Hudson rivers and even though it is now grown in, you can see that the house stood at one of the busiest sections of Upstate commerce.

During the months of Halloween, there are thousands of pumpkins that line the walks and beautiful displays to see along the paths of the estate and the river. This event is sponsored by the Hudson Valley Historical Association and is one of their biggest fundraisers. Don’t miss this annual event every fall.

The Blaze is amazing!

Some pictures from the MoMA Pumpkin Museum: 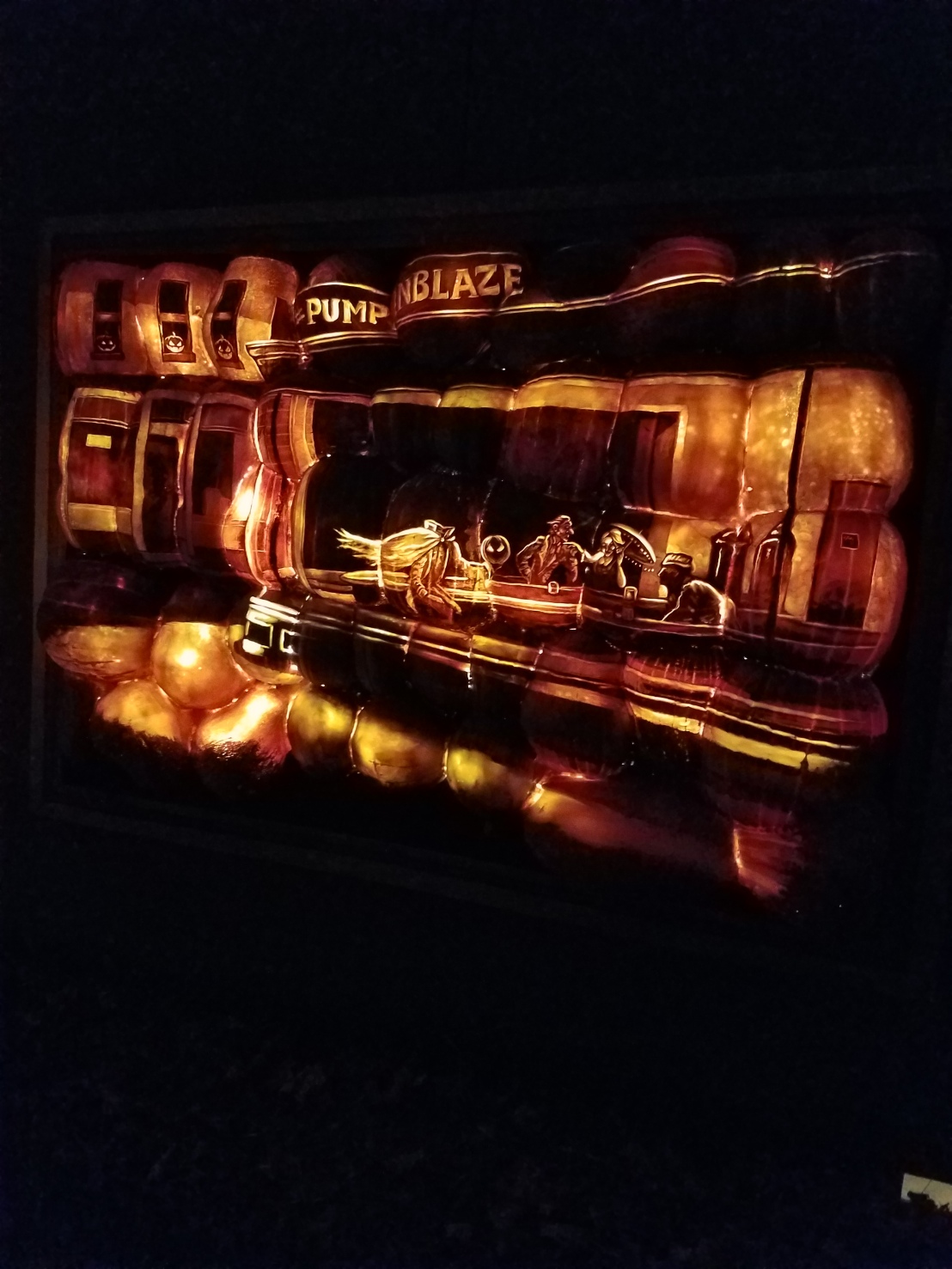 Their version of “The Scream”: 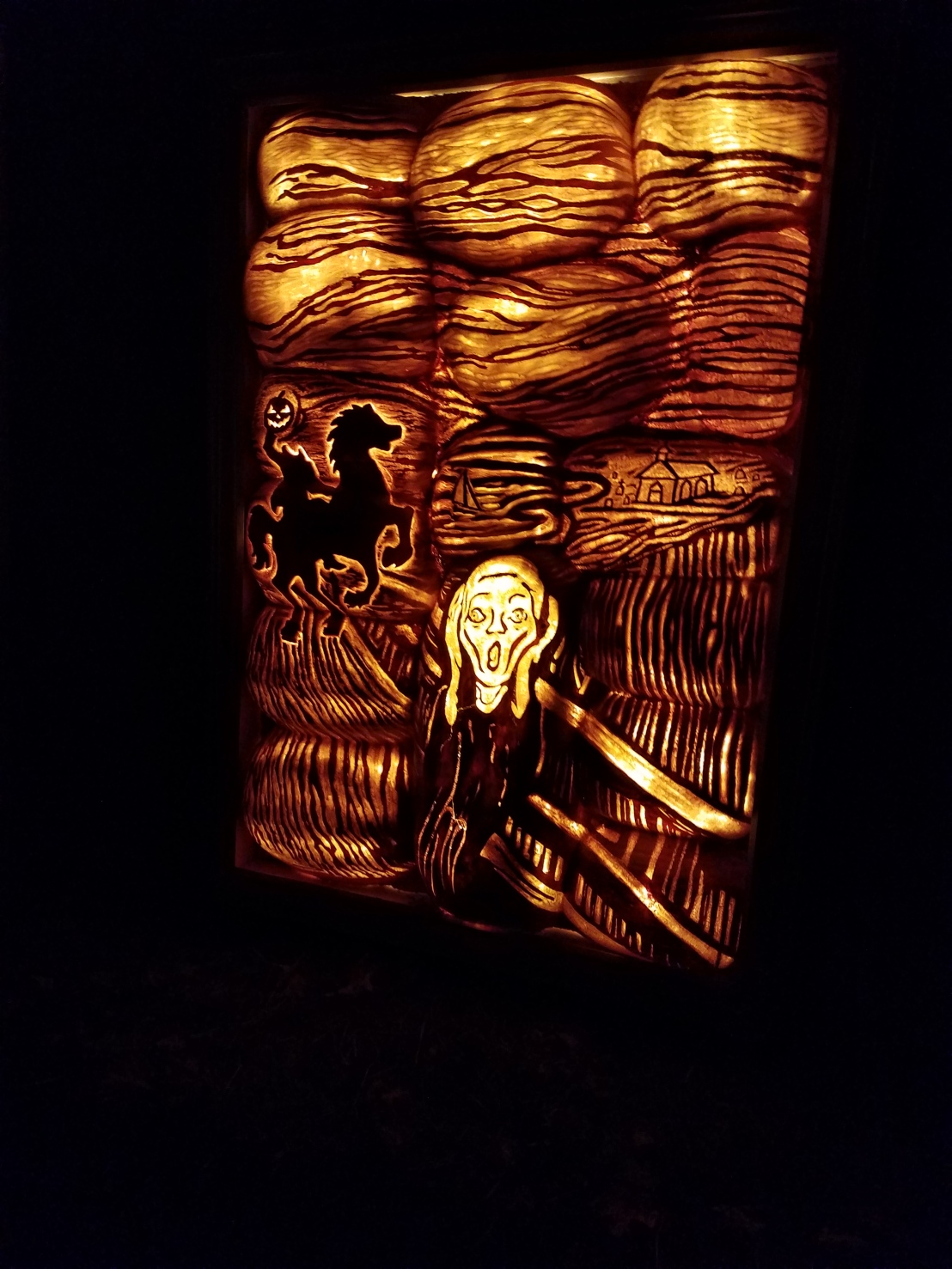 The Van Cortlandt Manor ablaze with lights and sounds

Justin Watrel at the Pumpkin Blaze

My Aunt and I at the Pumpkin Blaze

The History of the Van Cortlandt Manor:

By Royal Charter, Van Cortlandt Manor was originally a 86,000 acre tract granted as a patent to Stephanus Van Cortlandt in 1697 by King William III, stretching from the Hudson River on the west to the first boundary line between the Province of New York and the Colony of Connecticut, on the east, twenty English miles in length by ten miles in width in shape nearly a rectangular parallelogram forming, “The Manor of Cortlandt”. The massive holding was acquired by direct purchase from the Indians, in part by Stephanus van Cortlandt, a native born Dutch gentleman of New York and in part by others whose titles he subsequently bought, this tract together with a small tract on the west side of the Hudson River opposite the promontory of Anthony’s Nose, which he also purchased from the Indians.

The Manor House was built sometime before 1732 but was not any owner’s principal residence until a grandson, Pierre Van Cortlandt, moved there in 1749. At the time the manor house was on a 1000 acre portion of the original tract.

Pierre brought his family to the estate in 1749 and established the manor into it most vibrant days, according to some. During this period, the manor was operating an apple orchard, dairy farm, a bee house, a kiln, a tavern and a carpenter and blacksmith shops. Van Cortlandt Manor was a self-sustaining community while Pierre and his family resided in the estate. At this time, tensions leading to the Revolutionary War were building and the manor would become a place of wartime retreat. Pierre side with the colonies and the manor was used to assist the Continental Army, using its resources to make food and supplies. Pierre was involved with military legislature and his son Philip was a soldier for the Continental Army. Eventually Pierre and his family vacated the manor in the thick of war. The manor was ransacked by the British Army and left in poor standing. Philip, becoming a brigadier general by the war’s end, returned and along with his sister, Catherine, brought the manor back to working order.

Van Cortlandt Manor became an essential stop on the route from New York to Albany in the years that followed the war. The mills were once again thriving and provided the community and travelers with food, supplies and lodging. Pierre and his wife did not return until 1803 once the manor was in full working order again. The manor was passed down in the family until it was sold to a non-relative, Otis Taylor in 1945. By this time, the property had lost its luster and was not the flourishing estate it had once been.

Disclaimer: This information on the history of the house was provided by Wiki and I give them full credit on the information.

Located in the ShopRite Mall next to the Blaze: