The ‘Fearless Girl’ statue is the latest addition to the street art in lower Manhattan. Placed next to the statue of the ‘Charging Bull’, she portrays a defiance and a look that almost says, “I am standing up to the power and I am standing up to fear’. She has a look of determination on her face that clearly shows that she is standing her ground. She was designed by artist Kristen Visbal.

The statue is located at the northern tip of Bowling Green Park in Lower Manhattan both statues are an easy find on the Broadway side of the park. Be aware that this is a big tourist area for pictures so there will be a crowd.

There has been some controversy from Arturo Di Modica the creator of ‘Charging Bull’ who says that it takes away from the meaning of his own work. Di Modica has challenged that the piece exploits his work and distorts the meaning of his own work by turning the ‘Charging Bull’ into a villain instead of the his true meaning for the work which is a ‘symbol of prosperity and for strength’. Both statues are being planned to be moved by the NYC Parks Department in the future (Wiki and the New York Times 2018). 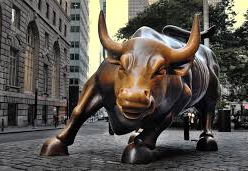 The statue was installed on March 7, 2017, the day before International Women’s Day, by State Street Global Advisors, in a campaign developed by advertising agency McCann New York. SSgA was celebrating the first anniversary of its “Gender Diversity Index” fund that “invests in U.S. large-capitalization companies that rank among the highest in their sector in achieving gender diversity across senior leadership. The concept for the statue was developed by Senior Art Director Lizzie Wilson and Senior Copywriter Tali Gumbiner. Wilson and Gumbiner established both the idea for the statue as well as the overall look of the girl using countless mood boards  and imagery, which Visbal referenced (Wiki). 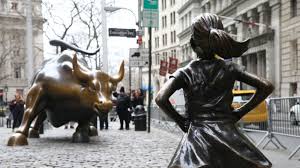 Fearless Girl was originally given a one week City Hall permit that was later extended to 30 days. Later, it was announced that the statue would remain in place through February 2018. Among those advocating for the statue to stay longer was U.S. Representative Carolyn Maloney of New York’s 12th congressional district who stated, “This statue has touched hearts across the world with its symbolism of the resiliency of women. New York City Public Advocate Letitia James wrote a letter that supported keeping the statue, “Fearless Girl stands as a powerful beacon, showing women, young and old, that no dream is too big and no ceiling is too high” (Wiki).

A petition on Change.org asking for the statue to be made permanent gathered 2,500 signatures in the first 48 hours. Efforts to make the statue permanent continued after the statue was granted a one-year permit. In April 2018, after ‘Fearless Girl’ had been in place for thirteen months, New York City Mayor Bill de Blasio announced that both ‘Charging Bull’ and ‘Fearless Girl’ would be moved to a location facing the New York Stock Exchange. The move would occur before the end of 2018 (Wiki).

The plaque below the statue states: “Know the power of women in leadership. SHE makes a difference.” (Wiki)

The statue is available to be seen 24 hours a day.

Disclaimer: The history of the statue was taken from Wikipedia and I give them full credit on the information. The rest is my personal opinions on the statue.