Don’t miss this two-day event in the first weekend in May when Morris County, NJ showcases all the ‘hidden gems’ that it has to offer. It was a great weekend!

I had been sent the notice that the County of Morris, New Jersey was having a two-day Open House of many of their historical sites for touring and for special events for a program entitled “The Pathways of History: Museum and Site Tours of Morris County, NJ”.

The “Pathways to History” event takes place every May

The weekend event spread to small museums, historical homes and cemeteries all over the County with walking tours and lectures at various sites. Having never been or even heard of many of these sites, I was interested in visiting as many as I could for my blog, “VisitingaMuseum.com” which is here on WordPress.com as well.

I plotted my two days of the event and tried to organize the trip so that we could see as many sites as we could. The event asked the sites to open one of the two days as… 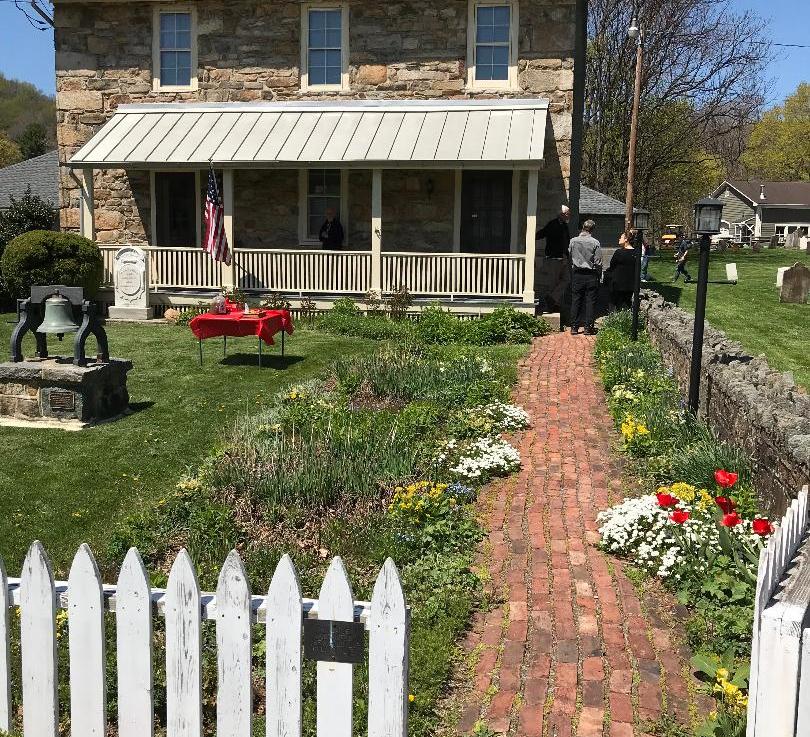 A Video on the Washington Township Historical Society

I came to the Washington Township Historical Site as part of Morris County’s “Pathways of History” tour and visited the Union Schoolhouse Museum and then the Union Church and Burial Ground that is located right next door on the same property. This sleepy little town was once a bustling manufacturing site with the sawmill and Ghrist around the corner and the Welsh Farms Ice Cream factory up the street from the site.

The museum, which was once the town’s schoolhouse, is an engaging site that showcases how the town developed over the last two hundred years. On the bottom floor, the society has Native American artifacts, period furniture and clothing and in the back of the museum is a full display of the original Welsh Farms Ice Cream factory. The Welsh’s were a very prominent family from the area.

Some of the old bottles and equipment from the factory

The second floor of the museum has a display of town memorabilia from different businesses, farming equipment from the area’s agricultural past and pictures of businesspeople and prominent citizens of the town. It shows how the commercial past of the community kept evolving.

Display of the town memorabilia

To the side of the second floor is a display of a period schoolroom from the time that the building served as a school of the local population. You can see that not much has changed over the years.

School rooms of the past are not too different from today

The one thing that creeped me out was a picture of a local businessman from the 1800’s who looked exactly like the actor, Blake Ritson, who plays “Oscar Van Rijin” in the TV show “The Gilded Age”. These men are almost 100 years apart and he looks like the actor from that exact time period.

The picture is of local businessman Ernest Paul Hunger

I had to take this picture because everyone says you have a twin from the past and I can tell that these two men look exactly alike in the same clothing. What is really interesting is that they are the same age at the same time period. Like that picture of the gentleman from the 1880’s that looks exactly like actor Nicolas Cage, I think there is some weird time travel here. It is almost like the film “Time after Time”.

After touring the whole museum, I went next door to visit the church and the cemetery for a tour. When I exited the museum, I had not really noticed the beauty of the gardens that surrounded the museum. The local garden club had done a great job in landscaping and planting the walled garden around the museum. In the early Spring, it was a colorful display of flowers.

The walled garden was so colorful in the early spring

The cemetery walk was intriguing in that you got to walk through the ruins of the old church and get to see how it was once constructed. It gave me insight of how big these churches were at one time and building construction was in early colonial New Jersey.

The ruins of the old Union Church

The Union Church surrounded by the cemetery

When we visited each family’s plot, there was a discussion about what contributions that everyone made to the town and their place in society. What was interesting was that the volunteers were cleaning the tombstones with tombstone cleaner, and I had wondered when we were taking the tour why they looked so new. There is a lot of care of the people of this cemetery.

The whole site is an interesting look into the community’s past by a group of volunteers who give it their all to make the site interesting, historical, visually engaging to the visitor and offer a surprise or two into history that you may not know of New Jersey. One the warm, sunny day that we visited the site, it made it even nicer to walk around and have the time to soak it all in.

When you visit the Union Schoolhouse and Union Church and Burial Ground take the time out to take the formal tour of the site. It is very informative to a past that is not so different from today. It offers a lot of insight of people’s lives of this community.

The history of the Union Church and Cemetery Site:

Mission: To bring together people interested in the history of Washington Township, Morris County, NJ and promote a better appreciation of our American heritage.

The history of the site:

European settlement had begun in Long Valley by 1730. The early settlers, primarily from Germany and Holland, came fleeing religious persecution, an oppressive tax burden and hoping for a better life in America.

In 1749, a joint log meeting house had been built near the site of the Stone Church by the Zion Lutherans and Dutch Reformed Congregations. During these early times the congregations were served either by preachers from these churches or by laymen. One of the ministers of the time was Henry M. Muhlenberg, who has been called the Father of the Lutheran Church in America. His son, John Peter also ministered to the Raritan Valley before 1772. In 1776, John left his church in Virginia to raise and lead a regiment in the American Revolution, serving with distinction and retiring as a brevet major general.

On February 4th, 1774, the Dutch Reformed and German Lutheran congregations drew up articles and agreements that provided for the building of a joint meetinghouse. “Whereas we the members of the Evangelical Reformed Congregation and we, the members of the Evangelical Lutheran Congregation are willing to build a meeting house jointly, “Acted the 4th day of February 1774, which is testified to by: Henry Muhlenberg Jr., deputy director of Zion’s Welsch; Diedric Strubel; Conrad Rorick; Casper Eick; Anthon Waldorf; Adam Lorenz; Philip Weis; Christopher Karn; Leonard Neighbour; Roulof Roulofsen; John Schwackhammer; Andrew Flock.”

According to local tradition, the stone used to construct the building of the meetinghouse, the people of the two congregations turned out in a body to cart the stone. It had been a previous agreement, that whoever on the day appointed, should bring the first load, should receive the honor of having his horse decorated with flags and ribbons. The story goes that Judge David Welsch, then 17, secretly loaded his wagon and hid it that night. The next day, wagons came like thunder from all parts of the valley. Although David Welsch was confident of winning, he was almost beaten. Before he could unload his wagon, all of German Valley was on the ground.”

A Stately and well built structure:

A description of the Stone Church was given during a sermon by Reverend Alfred Hiller in July 1876. He said, “it was a heavy gallery on the one side and across each end; the entrance on one side (south), under the gallery and on the opposite side (north) was the pulpit, one of the Jack in the Pulpit style, with sounding board suspended above. There is no chimney on the church, in the center of the church, a space about eight feet square was made with a dirt floor and on the square a great mass of charcoal was burned, the congregation getting for their share at least the smell of the fire.”

Historic photographs indicate the building had a clipped-gable or jerkin-head roof with roof ridge parallel to the longer north and south walls. The two-story church, three bays wide and two bays deep, featured a wide and two bays deep, featured a wide central entry surmounted by a segmental arch, as were the windows. The walls were of coursed rubble stone construction, pointed with a white lime-rich mortar, except on the south or front elevation which was stuccoed and “penciled” with white pointing to replicate regular ashlar stone. However, this may have been a later 19th century embellishment.

In 1832, both congregations decided to separate houses of worship. Since that time the Old Stone Church has stood abandoned and surrounded by the graves of the early congregants. Despite efforts at stabilization between the 1960’s and the 1980’s, the deterioration continued until recent efforts spearheaded by the members of the Washington Township Historical Society with permission of The Zion Lutheran and Long Valley Presbyterian Churches have improved this.

The Old Stone Church with the cemetery surrounding it