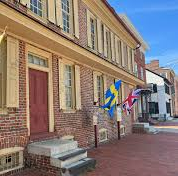 Grab your tour book and get in the car to visit all these wonderful sites. There is so much to see and do in Historical Southern New Jersey!

The one thing I refuse to do on Father’s Day is to spend the day at the cemetery. I know that is some people’s idea of honoring one’s family members but it is not mine. I went on Friday and paid my respects to my father (whom this blog is dedicated to) and spent time remembering some of the good times we had in past. I dropped some cut flowers from our gardens (some of which he planted) and said a small prayer. Then I left.

My idea of honoring my father and spending Father’s Day with him is to do something that we would have shared together. We were always running around somewhere and exploring something new and doing something fun. That is how I wanted to honor him. By being active and giving him a toast at Sunday dinner.

I had gotten a pamphlet on the historical sites…

I visited the East Point Lighthouse on a glorious sunny day when there was no wind in the forcast and it made for an excellent visit to this lighthouse right by the sea. I noticed that on almost all sides, there were man-made barriers to protect the lighthouse grounds from erosion.

The grounds were a combination of dunes with beach grass, rocks and tiger lillys all over the property to give it a colorful look. There were misty breezes from the water that felt so good as it got hotter that day. The property is pretty contained and there is parking all around the building but the lots are small.

I bought my tickets in the gift shop ($8.00), was able to look around at the well-stocked shop with its nautical books and tee-shirts and hats with the lighthouse logo on it. You are also able to go to the bathroom.

On the first floor is the kitchen with its time period ice box and coal stove which shows what life was life for a housewife before WWII. I am sure that electricity was tough getting to ligthouse especially during storms. You had washboards and basins for wash day and all the equipment to clean the house.

The lighthouse office of the lighthouse keeper was equiped with all things that are needed to keep the place running from maps to communication equipment to a fully stocked desk. There were no days off in this job. There was even a picture of Clara Noon, who as a little girl was the last child to live in the ligthouse. She visited again as a senior in the early 1990’s.

The upstairs had a fully furnished adults bedroom with period clothes of the early 1900’s to WWII and the furnishings were of various periods of living in the lighthouse. The children’s bedroom was really elaborate with rope beds, children’s furniture, lots of toys from the 1890’s to the 1930’s and a great doll collection. There was even a handmade dollhouse complete with elaborate furniture that was handmade by a local resident. It was very impressive.

There were also all sorts of maps and rare books to look at and a complete radio room and then the last set of stairs took you up to the light were you could see the views of the ocean. In fact the views from all the floors was pretty impressive.

It is an amazing self-guided tour that gives you a glimpse into the life of the families that lived here. It may not have been this elaborate as all the items inside the lighthouse but it gives you a clue on what life must have been like by using your imagination.

What was interesting is that the ligthouse opened in 1849 and then became fully automated in 1911 so its use of a lighthouse keeper was pretty much over before WWI. Still over a period of time you can see how the job changed with automation and advancement of technology.

I took time to walk the grounds. The landscaping and the beach dunes gave it a very attractive backdrop.

The History of the East Point Lighthouse:

The East Point Lighthouse is an active lighthouse that was built in 1849, situated on the southern bayshore in Cumberland County, NJ. The ligthhouse originally had a lighthouse keeper to maintain the lights. In exchange for doing this work, they were allowed to live here rent free and were paid the sum of $1.00 per year for their services. It was fully automated by 1911.

The lighthouse was blacked out in WWII and then after the war, the Coast Guard decided the lighthouse was not longer necessary and decommissioned it in 1941. Over the years it deteriorated quickly over time.

In 1955, the Federal Government decided to sell the lighthouse and the propery as surplus and it was purchased by a Long Island construction company but before the sale was consummated it was found that proper disposal procedures were not followed in that the lighthouse was not first offered to the State of New Jersey. The state was interested in the property not because of the lighthouse but because the site was surrounded by the Heisersville Wildlife Refuge and would provide a place for boats to be launched.

Local residents became concerned with the condition of the lighthouse and in February of 1971, the Maurice River Historical Society was founded with the goal of restoring the lighthouse. In July of 1971 before negotiations were complete, the lighthouse was set on fire. Through a series of grants over the years and a lot of dedication from the volunteers, the lighthouse has been reconstructed.

This fully restored and furnished lighthouse with its beacon on each night serves as both an active navigational aid serviced by the United States Coast Guard as well as a year round museum, thanks to the work of the Maurice River Historical Society that manages this historical site.

Through the work of the non-profit historical society that over saw the full restoration, fully furnished, maintains and manages the lighthouse, it’s open to the public to climb/tour and for specials events year round. Both the lighthouse and grounds surrounding the lighthouse are on the National Historic Registry. East Point is the second oldest lighthouse in New Jersey (behind the Sandy Hook Lighthouse) and the only remaining New Jersey land based lighthouse on the Delaware Bay.

The two story Cape Cod style lighthouse with its distinctive red roof by day and blinking red beacon by night, marks the mouth of the Maurice River on the Delaware Bay. East Point is known for its rich maritime history, spectacular views, wide variety of wildlife and beautiful sunsets, making it a popular destination for tourist, artists, photographers, wildlife and history enthusiasts alike.