Open: Sunday-Monday 9:30am-5:00pm (closes 4:00pm between November and January 5th) The house is only open between April and the beginning of January.

I recently visited the Boscobel House and Garden for their Christmas decorations and for a tour of the house at the holidays. Like most houses of its time period (the house was built in 1806), it was Post-Revolutionary War and the decorations would not have been that lavish as in the Victorian times.

The Grand Foyer at Boscobel

The house was tastefully decorated with garlands and mistletoe along the archways inside the foyer and with holly and mistletoe inside the house. Some of the tables were set for afternoon tea and entertaining in the Reception Room and there was a small table Christmas tree which were just coming into vogue after the War of 1812. The Reception Room was also set for entertaining as would be done in the holidays months in the later 1800’s. 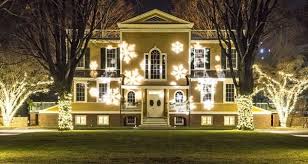 The lights of Boscobel during the holidays

He told the story of the man who had the house built, how he made his fortune, how he died young and then his son and his wife dying around the same time and the son-in-law squandered the fortune with a series of bad investments and the house was foreclosed. It sat empty and was falling apart until a group of local citizens saved it.

The house is now back in its full beauty and furnished in period furnishings to reflect the time that the house was built. The tour takes you through the main foyer which you would have been received in and there would have been dancing here with a band at the top of the steps.

The Drawing/Receiving Room at Boscobel

We next viewed both the Drawing/Music Room where Mrs. Dyckman would have received guests and where informal entertaining would have happened. There was also musical instruments and player music boxes on display.

We then toured the Library area with books that were brought in from England and furniture that had been custom made for the house.

We crossed the foyer again and entered the Formal Dining Room, where the table was set for a holiday dinner. The candles had been lit (they were electric) and the room had a warm glow to it. The windows must have let in natural light so earlier meals must have been quite nice when in the summer months the sun shined inside the room.

The Dining Room for the holidays at Boscobel

There was custom made china set on the places and there was family silver next to it. The side boards were made by Sheraton and the cut glass had been imported from England.

We then toured the back areas of the Butler’s Pantry where all the food would have finished and plated. The room had all sorts of gadgets to keep the plates warm and where all the silver and china would have been kept.

We then toured the upstairs bedrooms, where we learned the family would have ‘camped out’ in for the cold winter months. I was surprised to learn that the whole front of the house was closed off and the upstairs bedrooms would have been sealed off with fireplaces to keep them warm and the cloth hangings around the bed to keep out the drafts. Both mother and son’s bedrooms were nicely furnished with period furniture.

The bedroom at Boscobel

Our last stop was the kitchen in the basement back area of the house where all the food would have been prepared and brought up to the Butler’s Pantry. There were all sorts of kitchen equipment for roasting, baking and boiling. You could tell that it was not easy work cooking these elaborate meals without the modern conveniences that we take for granted today. These cooks had a tougher time with the stoves and fireplaces as a source of cooking.

What I thought was a nice touch at the end of the tour in the kitchen area was that Sam served us cold apple cider and small gingerbread men which I thought was special keeping with the house’s tradition of a place of entertainment. I thought it was gracious and very much welcome.

It really was an interesting tour and I will have to return in the summer months.

States Morris Dyckman was a descendant of a German-Dutch family whose roots in New York stretched back to 1662. During the American Revolution, he was a Loyalist serving as a clerk in the British army’s Quartermaster Department. In 1779, he accompanied his quartermaster superiors to England and for the next decade he rebutted the government allegations that the quartermasters had engaged in profiteering. (As the keeper of the department’s ledgers, he well knew how they had fattened their purses, assets Dyckman’s biographer James Thomas Flexner). The officers were eventually cleared, largely because of Dyckman’s testimony. They rewarded him with an annuity.

Dyckman returned to America in 1789 after a general amnesty of Loyalists had been declared. Five years later, he married Elizabeth Corne, a member of a distinguished New York family and 21 years his junior. Dyckman returned along to England in 1800 to settle problems with the payment of his annuity. The trip lasted nearly four years but was a success. He returned a rich man worth more than seven million dollars today. Before he left England, he bought many items for the house including silver, china, glass and books for his library.

The architect for the house was unknown but records show that Mr. Dyckman had some influence in the design of the house. Mr. Dyckman died in 1806 at age 51 and the house had only had the foundation finished at time. His 30 year old wife, Elizabeth finished the house in 1808 with the help of her husband’s cousin, William Vermilyea. She furnished the house and added to its inventory. She and her son, Peter lived in the house upon finishing it. She lived in the house until her death in 1823 and her son, Peter died the following year in 1824 at age 27. The house stayed in the family until about 1899 and then was foreclosed on. According to the guide, the house had not been updated at that point and was falling apart. The house had a series of absent owners over the next few years and then sat empty. It was bought by Westchester County in 1924 and the grounds were turned into a park. 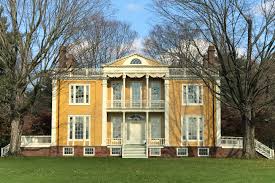 In 1945, the park was acquired by the Veterans Administration for a hospital and the owners took care of the exterior for a time. By 1954, the house was considered an excess on the budget and was being sold for $35.00 for demolition.

The house was saved by Historian Benjamin West Frazier and some friends of his who raised about $10,000 to have the house moved and dismantled to save ‘this treasure’. The house was stored in pieces until 1955, when Lila Acheson Wallace, the co-founder of Readers Digest became involved in the project.

She purchased the land that the house now sits on and devoted her time and money to have the house restored and worked with the curators of the Metropolitan Museum of Art, where she was a donor to help restore the house into its period design with landscaped gardens and period furniture. In 1959, she commissioned the firm of Innocenti & Webel to create the gardens that surround the house. The house opened to the public in 1961.