This National Registered restored 1872 New York, Susquehanna & Western railroad station, one of oldest in New Jersey, is located in the heart of Maywood, NJ. Restored by the Maywood Station Historical Committee and opened in September 25, 2004, it contains an extensive railroad museum and collection. The site also contains a restored caboose and engine.

I visited the Maywood Station Museum when it was open recently and found a fascinating collection of railroad memorabilia, Maywood fire department history and early maps of the town of Maywood. It is a treasure trove of articles for people who like to study railroad history especially its growth in small towns, early stages of industry in the town and in New Jersey.

The inside of the station museum

There is a lot of items that show the history of rail service not just on the train but in the station as well. There are antique desks, phones, ticket takers, mailboxes, benches and pictures all from the turn of the last two centuries.

The museum is operated and staffed by the volunteer membership of the Maywood Station Historical Committee. The main focus of the museum is concentrated on the history of Maywood Station and the New York, Susquehanna & Western Railroad and the roles they played in the development of the Borough of Maywood and the surrounding area. The museum collection contains hundreds of photographs, displays, documents, maps and artifacts covering the histories of Maywood Station, the NYS&W and local railroads, the Borough of Maywood and the local region, which are changed periodically and designed to entertain and educate visitors of all ages as well as offer a virtual timeline to these subjects. Maywood Station Museum is also the official site of the New York, Susquehanna & Western Technical & Historical Society’s (www.nyswths.org) archive, which contains thousands of drawings, maps, track diagrams, photos, timetables, documents and records covering the history of the New York, Susquehanna & Western Railroad (Wiki). 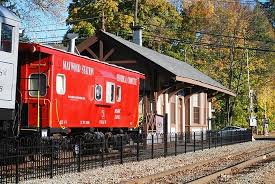 The Museum and Railroad Car

For those interested in historical buildings, meticulous care has been taken by the Maywood Station Historical Committee to show the museum in a historical context.  The museum features the original woodwork painted and stained in the original colors and original Maywood Station furnishings have been restored and displayed such as the potbelly stove, station agent’s desk, chairs, telegraph keys and freight scale. Victorian-period original light fixtures and sconces adorn the ceilings and walls. Additional items have been painstakingly reproduced to the exact original specifications of over one hundred years ago including the station benches and bay window area (Wiki).

The History of Maywood Station: 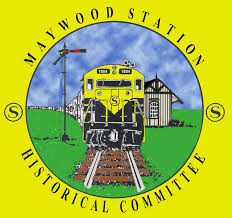 In 1871, the New Jersey Midland Railway, predecessor of today’s New York, Susquehanna & Western (NYS&W), began constructing a rail line between Newfoundland, NJ and Hackensack, NJ.  The line was part of a plan to connect with the New York & Oswego Midland (later New York, Ontario & Western) in Middletown, NY and provide rail service from the Great Lakes to New York Harbor. The residents of what would later become Maywood, which at the time was part of an area called Midland Township, saw the advantages of the new railroad and requested a stop be made. At the time, approximately 13 homes with nearly 90 residents were in the boundaries of today’s Maywood. Soon afterward, construction of Maywood Station began. On March 11, 1872, the New Jersey Midland commenced operating trains  on the new line and Maywood Station formally opened in the same paint colors you see it restored to today. Six passenger trains a day in each direction initially stopped at Maywood. It should be noted that for a brief period after that station opened, the station sign said “West Hackensack” but this removed due to the requests of local residents who wanted the station named “Maywood”, as the immediate area surrounding the station had then become known (Maywood Station Museum).

A station agent was employed and it is believed that the first agent was name George Sipley. The station agent handled passenger  baggage, freight shipments to and from the station, passenger ticketing and general functions in addition to performing the job of postmaster. In the 1872 to 1910 period, Maywood Station served as Maywood’s post office at various times when it wasn’t housed in a local merchant’s store. Another station agent/postmaster was Charles M. Berdan, who held this position in the late 1890’s into the early 1900’s. Mr. Berdan’s home was located directly across Maywood Avenue from the station and exists today. Maywood Station was also equipped with a telegraph so that the railroad could communicate between their stations and local residents could send messages around the world. The station also offered Wells Fargo and later, Railway Express Agency delivery services. These services lasted into the 1960’s (Maywood Station Museum).

When Maywood Station was built, it originally located on the south side of the current tracks. In 1893, the station was moved to its present location on the north side of the tracks due to the addition of a second set of tracks being constructed and a purchase of additional land by the railroad. At the time, several additional NYS&W stations along the line were similarly moved for the same reason. When the station was moved, it was jacked up onto the rails, the rails greased, spun around and slide approximately 30 feet closer to Maywood Avenue, then jacked up again and moved to its present  location. A new foundation was also added. It is interesting made at this time including the addition of a freight platform at the “new” rear of the station.

The spot where Maywood Station was moved to originally included a passing siding where steam locomotives were stationed to be added, when necessary to help heavy freight trains on the several grades encountered heading west on the line. When the station was moved, the passing siding was cut back and one of the two switches was removed. The remaining trackage was then used to store freight cars, which were unloaded at the station. The siding started to the west of the station and ran 440 feet to near the rear freight platform of the station. The siding was last used in the early 1970’s and remnants of it can be seen today (Museum Station Museum).

In 1894, the approximate 1.1. square mile area that included Maywood Station, formerly part of Midland Township was incorporated as the Borough of Maywood. Also that year, the NYS&W expanded into western New Jersey and through its Wilkes-Barre & Eastern Railroad subsidiary, into the coal fields in the Pocono region of northeastern Pennsylvania. The rail line could now take a passenger from a ferry at New York City to a connection at Jersey City, NJ to almost Scranton, PA on its own rails. The added ease of transportation began to attract manufacturing to Maywood as well as a demand for new homes. In 1894, the total residents living in Maywood numbered approximately 300 but this was about to change (Maywood Station Museum).

New manufacturing and homes sprang up in the area surrounding the station and included such industry as Schaefer Alkaloids Company, Maywood Chemical Company and Maywood Art Tile Company. As these companies expanded so did Maywood’s population and by 1920 it numbered nearly 3000 (today Maywood has approximately 9,500 residents). The 1920’s also marked the height of passenger service provided by the NYS&W at Maywood Station. Thirteen passenger trains in each direction stopped at Maywood Station on a daily basis. Freight shipments continued to be delivered to the station and most of the local industry had their own rail sidings serving their plants. The NYS&W was enjoying a period of posterity and in 1920, a freight house addition was added to rear of Maywood Station and the exterior walls received a stucco finish over the existing boards and battens.

Stucco was in-vogue in the 1920’s and the NYS&W applied this material to several other stations on their line as well. In 1926, another round of various improvements were made at Maywood Station including the addition of interior men’s and women’s bathrooms, an 8-inch concrete floor installed to replace the wooden floor planking plus electrical and heating improvements. Unfortunately the Great Depression stuck in October 1929 and lasted well into the late 1930’s and the growth slowed dramatically.  In 1937, the NYS&W declared bankruptcy and shortly thereafter was spun off from its parent, the Erie Railroad, which had controlled it since 1898. Around the same time, Maywood Station’s bay window was removed due its deteriorating condition (Maywood Station Museum).

The newly independence NYS&W fought hard to survive and cut back certain services but at the same time tried innovative concepts like streamlined, self-propelled, rail passenger cars as a way of cutting costs while boosting efficiency. The railroad also quickly retired its steam locomotives and replaced them with more efficient diesel locomotives stating in 1941 and completed the program in 1947. During World War II, the fortunes of the NYS&W did improve with the wartime demands placed on America’s railroads. As in World War I, many of Maywood’s servicemen departed through Maywood Station, some never to return. By 1953, the NYS&W was solvent once again but only for a few more years. Faced with mounting losses from the passenger services it offered and America’s love affair with the automobile and a new interstate highway system, the railroad once again embarked on a period of reducing their passenger train schedules.

Losses continued and on June 30, 1966, the last passenger train called on Maywood Station as well as on the entire NYS&W, however the railroad continued to utilize the tracks at Maywood Station for their freight operations, which continues to prosper to this day. Shortly after the end of passenger service, the station was closed and was used by the NYS&W as maintenance base and for storage. Bill Spence served as Maywood Station’s last station agent. In the late 1970’s. Maywood’s Veterans of Foreign Wars (VFW) leased the station from the NYS&W to be used as a meeting hall. The VFW made a number of improvements including repainting the station, repairing cracked stucco, repairing the roof and maintaining the grounds. In the early 1990’s, the VFW moved out of the station and it remained unoccupied until June 2002, even thought the NYS&W attempted to lease it to another tenant during this period.

Faced with a pending order of demolition by the Borough of Maywood in early 2002 due to the deteriorating conditions of the station, a volunteer, 501C3 non-profit group named the Maywood Station Historical Committee Division of the New York, Susquehanna & Western Technical & Historical Society Inc. was formed on May 29, 2002 with a plan to restore the station and turn it into their museum. After several years of volunteer work to restore the station and create a museum, the group has successfully achieved their objectives and more, including placement of the station on both the National Register and State of New Jersey Register of Historic Places. The station now enjoys the notoriety as being one of the most impressive restoration projects and museum efforts to date in the State of New Jersey’s historical community (Maywood Station Museum).

I want to the thank the Maywood Station Museum for this interesting information and please check out their website at http://www.maywoodstation.com.