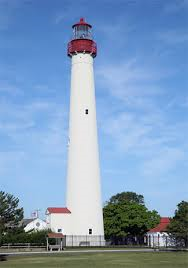 This historic site has been restored and administered by the Mid-Atlantic Center for the Arts & Humanities in conjunction with N.J. Department of Environmental Protection Division of Parks & Forestry.

The Cape May Lighthouse: Climb the 199 steps of this 1859 vintage tower for a breathtaking view of the Jersey Cape, where the Delaware Bay meets the Atlantic Ocean. Over the past 30 years, MAC has totally restored the Cape May Lighthouse. A fully accessible Visitors Center is located in the adjacent Oil House as well as a Museum Shop stocked with lighthouse and maritime must haves.

Frequently asked questions about the Cape May Lighthouse

Questions about the structure:

*How Tall is the lighthouse? The lighthouse is 157 feet 6 inches tall from the ground line to the ventilator.

*How many steps are there to the top? There are 217 steps from the ground to the top with 199 steps in the tower’s cast iron spiral staircase.

* How old is the Lighthouse? The Cape May Lighthouse was built in 1859 and is the third fully documented lighthouse to be built at Cape May Point. The first was built in 1823; the second in 1847. The exact locations of the first two lighthouses are now underwater due to erosion.

*How thick are the brick walls? The Lighthouse actually has two separate walls. The outside wall is cone-shaped and is 3 feet 10 inches thick at the bottom and 1 foot 6 inches thick at the top. The inside wall is a cylinder with 8.5 inch thick walls which support the spiral staircase. The walls were designed to withstand winds several times above hurricane force.

*Is the beacon still working? Yes, The Coast Guard continues to operate the light as an active aid to navigation. The light is visible 22 miles out to sea and flashes every 15 seconds. A lighthouse’s flash pattern is called its ‘characteristic’, every lighthouse has its own light characteristic and exterior paint scheme (called a daymark) so that ship captains can tell them apart.

*What were the two small rooms on either side of the entrance hallway used for? They were storage rooms that held tools, implements and fuel for the lantern before the Oil House was built. The keeper also used one as a small office. 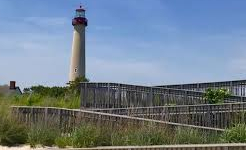 *Questions about Lighthouse Keepers and their responsibilities

*Who worked at the Lighthouse?  The Lighthouse was staffed by keepers who worked for the U.S. Lighthouse Service. Cape May’s lighthouse generally had one head keeper and two assistants. They carried the oil to the top of the tower every day to power the light and kept the lens apparatus clean and in working order. Keepers’ pay averaged $600.00 a year around the turn of the 20th century.

*Where did the keepers live?  There were two houses built right next to the Lighthouse around 1860 for the keepers and their families. One has since burned but the other is still standing on the other side of the fence near the entrance to the tower.

1853-First recorded lighthouse constructed. The 1823 tower was 68 feet tall and its location is now underwater due to erosion.

1847-The second lighthouse was built. It was a 78 foot tower located directly in front of the present tower, just beyond the present shoreline. It was replaced by the present lighthouse because it was poorly constructed.

1857-The Army Corps of Engineers began construction on the present tower, which cost $40,000 to build. The first order Fresnel lens, which is now in the Cape May County Museum, cost about $15,000.

1859-The Lighthouse was first lighted on October 31. The next year, two lighthouse keepers dwellings were built. The one remaining is now used by the State Park Service.

1893-The oil house was constructed.

1902-An incandescent oil vapor lamp was installed and replaced the Funck multiple wick first order hydraulic float lamp that dated back to 1878.

1933-The light apparatus was electrified.

1936-The light apparatus was automated which eliminated the need for lighthouse keepers being permanently stationed at the tower.

1939-The United States Lighthouse Service was discontinued and its equipment and personnel transferred to the U.S. Coast Guard.

1941-The Lighthouse was darkened until 1945 because of the World War II. The Atlantic coast was on black-out due to the presence of enemy submarines.

1946-A DCB-36 rotating light (like an airport beacon) was installed. The original first order Fresnel lens was placed in the Cape May County Museum.

1986-The Lighthouse was leased to MAC by the State of New Jersey Department of Environmental Protection, Division of Parks and Forestry, who in turn leased the structure from the Coast Guard.

1988-MAC undertook public safety improvements that allowed the public to climb to the top.

1989-A grant from the Bicentennial Lighthouse Fund underwrote the restoration of the Lighthouse’s windows and doors.

1990-The oil house was restored and adapted for use as orientation center and museum shop, with funding from the Bicentennial Lighthouse Fund and the New Jersey Historic Trust.

1992-The ownership of the Lighthouse was transferred from the Coast Guard to the State of New Jersey.

1994-Grants from the New Jersey Historic Trust and the federal ISTEA program administered by the State DOT funded painting of the tower and restoration of the lantern and roof.

1998-Grants from the same agencies funded all remaining restoration of the lighthouse structure.

2000-2001-A grant from the New Jersey Historic Trust funded the grounds restoration project.

2002-The Coast Guard installed a modern light known as a DCB-224. It uses parabolic mirrors to focus the beams rather than lenses.

2010-The Friends of the Cape May Lighthouse group was formed. You are cordially invited to join. Call 609-884-5404 or visit http://www.capemaymac.org.

2016-The Coast Guard installed a new, state of the art beacon known as VRB-25 (Variable Rotating Beacon) replacing the DCB-224 that had suffered irreparable damage due to a lighthouse strike.

*Is the Lighthouse haunted? Exit Zero Ghost Writer and psychic medium Craig McManus has visited the Lighthouse and detected the ghosts of several former keepers and their families. Perhaps you may encounter them yourself on a Ghosts of the Lighthouse Trolley Tour!

*Why is the Lighthouse leased to the Mid-Atlantic Center for the Arts & Humanities (MAC)?

In the 1980’s , the Coast Guard began a nationwide program of leasing lighthouses to private organizations, like MAC, which are capable of preserving them. In 1986, the Coast Guard leased the Lighthouse to MAC, which assumed the responsibility for its restoration, maintenance and operation as a lighthouse museum. In 1992, ownership of the Lighthouse was transferred from the Coast Guard to the State of New Jersey in order to make the restoration project eligible for state historic preservation funding. The state monitors the historical authenticity of the restoration and also makes available to Lighthouse visitors the parking and restroom facilities of the adjacent state park.

MAC is a non-profit organization with nearly 4,000 members that was founded in 1970 to save and restore Cape May’s Physick Estate and operate it as a historic house museum. The Physick Estate is also home to the Carroll Gallery with an array of changing exhibitions, a museum shop and the Carriage House Café & Tearoom. MAC has also restored the World War II Lookout Tower (Fire Control Tower Number 23) located nearby on Sunset Boulevard. In addition, MAC promotes Cape May’s Victorian heritage through a year round schedule of special events and trolley, walking and historic house tours. MAC is also one of the area’s leading sponsors of the performing arts with its Cape May Music Festival every May and June. Please call 609-884-5404 for details on MAC’s calendar of events or visit our website at http://www.capemaymac.org.

*How much did it cost to restore the Lighthouse?

Since 1987, closed to two million dollars has been spent to restore the Lighthouse and oil house and allow the public to climb safely to the top.

*Is the Lighthouse open to the public?

Yes, Hours of operation vary throughout the year. The tower is open daily, April through November and on weekends most of the rest of the year. The grounds ground floor, tower and watch room gallery are open to the public. All tours of the tower are self-guided.

Mid-Atlantic Center for the Arts & Humanities

Disclaimer: This information was taken directly from a pamphlet from the MAC Cape May Lighthouse Museum. Please call the above number or email address for more information on the site. It is well worth seeing just for the view alone.

One thought on “The Cape May Lighthouse 215 Light House Avenue Cape May Point, NJ 08212”