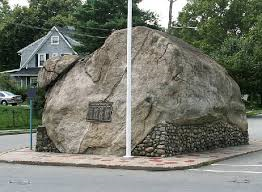 The ‘Rock’ where the town of Glen Rock, NJ gets its name from is more than just a rock in the middle of road off the downtown. It has a rich history that is part of the history of Bergen County itself.

Glen Rock was settled around a large boulder in a small valley (glen) from which it gets its name. The boulder, a glacial erratic weighing in at 570 short tons (520t) and located where Doremus Avenue meets Rock Road is believed to have been carried to the site by a glacier that picked up the rock 15,000 years ago near Peekskill, New York and carried it for 20 miles (32km) to its present location. The Lenape Native Americans called the boulder “Pamachapuka” (meaning ‘stone from heaven’ or ‘stone from the sky’) and used it for signal fires and as a trail marker (Wikipedia).

This is an interesting part of Bergen County’s early Native American history and is located right off the downtown area of the town on Rock Road.