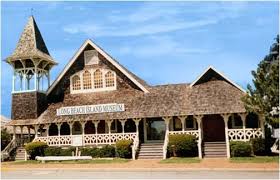 Open: July and August Sunday-Saturday 10:00am-4:00pm/June & September Saturday & Sunday 12:00pm-4:00pm. Special Appointments can be made at other times of the year and the museum is open for special events held by the town and for the holidays.

This seasonal museum is a ‘must see’ on Long Beach Island when visiting the town of Beach Haven. It is the perfect rainy day place to visit. The museum covers all aspects of the history of the island from its time when the Native Americans lived and fished here to the coming of the English. The museum shows in pictures and artifacts how the island was developed into a Summer resort retreat catering to middle class and wealthy tourist mostly from Philadelphia.

The artifacts range from arrowheads and fishing equipment that the Native Americans left behind to a recent discovery of an old wooden boat created by the Lenni-Lenape  tribe. The museum describes in detail life in the Victorian Age on the island with a series of pictures of the old resort hotels, most of which have burned down over the last 100 years, to artifacts that from this time including china, silver and menus from the hotels. There is also a creation of a Victorian room, a telephone operator office, rail office and a children’s toy display from that time. 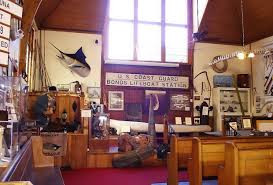 The Front Room of the museum

This is an interesting display of the fishing industry on the island as well. There is all sorts of equipment that has been used over the last 100 years and the progress that has been made in the industry. There are exhibits on the whaling industry and its lasting affects on the island. There is also the story of the shifting of the tides and the disappearance of Tucker’s Island, a small island to the south of Long Beach Island that has since disappeared underwater due to the shift in the currents.

Each area of the museum contains interesting pieces of the island’s past and you should take the time to look at each section carefully. For such a small museum, it is packed with interesting facts and a fascinating story of the development of the New Jersey shoreline and the role it is playing in our ever changing life down the shore.

The back room displays of the museum

The Long Beach Island Historical Association collects, preserves and interprets the history of Long Beach Island through its educational programs, guest lecturers, walking tours, special events and an ever growing research center. The museum, situated at the center of Beach Haven’s Historic District, showcases 24 exhibits which include over 450 photographs and hundreds of artifacts for the sole purpose of encouraging the public to not only understand out island’s rich history but also to appreciate the people and events who helped in shaping its character (Museum Website).

History of the Museum and Town:

Before the colonial period the native Lenape tribes in the local area travelled in wooden dugout canoes to the island seasonally, to escape the heat, fish, gather clams to eat and shells for jewelry and trade. The early local colonists used the barrier islands much the same, seasonally to fish, whale (semi-permanent campus were established as early as 1690), gather salt hay, bayberry & beach plum and make sea salt.

As the settlers became more established, ports such as Clamtown (later Tuckerton) were established about 1700 on the mainland and roads improved. Cattle were grazed on Tucker’s Island by 1735. Permanent seasonal accommodations were built on the island for men coming to fish and hunt; such as the Philadelphia Company House (started as Horners in 1815, became Bonds from 1851-1909) near Tuckers Island just south of what is now called Holgate and the Mansions of Health in Surf City (1822-1850). There was a “boarding hotel” at Barnegat inlet from about 1820 and the first manned lighthouse was built at the inlet in 1834. A manned lighthouse was built on Tucker’s Island in 1848, where a community, later called Sea Haven was springing up.

The island’s “modern” history begins as the railroads reached south to Toms River and Barnegat; with the Tuckerton Railroad reaching Manahawkin and Tucketon by 1872. The railroad allowed visitors (and goods needed for comfortable living) to reach the shore quickly and also allowed for shore products to be shipped to Philadelphia & New York all year. The first year-round life-saving stations were were established in 1871. Land Development companies laid out Beach Haven in 1872 and Barnegat City (now Barnegat Light) in 1878, with sailboats and steam launches begin used to transfer visitors and goods from mainland railroad to the island. The Parry House, Engleside and later the Baldwin hotels. were built in Beach Haven and the Oceanic & Sunset in Barnegat City.

The Tuckerton & Long Beach Land & Improvement Co. principals were also major stockholders in the Baldwin Locomotive Co., the Tuckerton Railroad and the Pennsylvania Railroad. After they and their wealthy Philadelphia friends built houses in Beach Haven, the PRR was convinced to build a railroad trestle to LBI which opened in 1886 (abandoned 1935) leading to an extended property boom from the 1880’s-1920’s, especially in Beach Haven. Other smaller communities such as: Spray Beach (1889), Beach Haven Terrace, Brant Beach, Surf City (Inc. in 1899) and Harvey Cedars (Inc. in 1894) were established along the railroad.

Although most of the houses built were still seasonal, the presence of the railroad (and later the 1914 automobile bridge) made permanent business & year round living on the island feasible. Census records show that the island’s permanent population was 33 people in 1880, increasing to 522 in 1910 and 1827 in 1930.

After the Depression of the 1930’s and the Second World War, development resumed in the “Cape Cod” period 1846-1962; assisted by the completion of the Garden State Parkway to Manahawkin in 1954 and the opening of the four-lane causeway (to replace the old two-lane wooden bridge) in 1956. The 1962 storm and early 70’s economic problems temporarily delayed development. By the late 70’s, the island was essentially “built out”. Most recent building boom of the period 1980-2007 consists of teardown/replacement of existing homes.

Because of early erosion in Barnegat City, Surf City and elsewhere and the extensive tear-downs of the 1980’s and 1990’s, the majority of the surviving 19th century and early 20th century structures on LBI are in Beach Haven. The Beach Haven Historic District (running from 5th to Chatsworth, east of Bay Avenue/LBI Boulevard) was created in 1983 in response to the increasing loss of historic structures and conflicting building styles. As of 2012, it is the only historic district on LBI.

(From the Museum website: I give full credit to the Long Beach Island Historical Association Museum for this information)