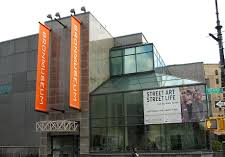 The Bronx Museum of the Arts

My review on Tripadvisor:

I recently had some time to visit the Bronx Museum of the Arts when I was visiting Yankee Stadium recently for a football game. The museum is right down the road on the Grand Concourse. It is an impressive little museum.

I had wanted to see the exhibit “Art Versus Transit: 1977-1987” by artist Henry Chalfant who had recorded the graffiti art on the subway cars during the late 70’s into the early 1980’s. This is before the subway investing in the new subway cars that could be cleaned by hosing them off.

The art was interesting as it was an expression of the times just when Hip-Hop was becoming popular and the City was going through the financial crisis. The artist did a good job capturing the times. Not only do we see the art but the music and dance as well of the time.

The other exhibition that I saw was “The Life and Times of Alvin Baltrop” which displayed the artist’s interpreted that Gay Community and the beginnings of the AIDS crisis. It was an another interesting perspective of the times of New York City.

The Bronx Museum of the Arts is a contemporary art museum that connects diverse audience to the urban experience through its permanent collection, special exhibitions and education programs. Reflecting the borough’s dynamic communities. The Museum is the crossroad where artists, local residents, national and international visitors meet.

Today an internationally recognized cultural destination. The Bronx Museum of the Arts is committed to presenting new ideas and voices in a global context and making contemporary art a vital, relevant experience. For the past four decades, the Bronx Museum has presented hundreds of changing exhibitions featuring works by culturally diverse and under-represented artists from a spectrum of levels. Exhibition have investigated themes of special interest to the Bronx community while exploring the interplay between contemporary art and popular culture.

A permanent collection of over 2000 artworks in all visual media preserves and documents artists who are not typically represented within traditional museum collections by showcasing work by artists of African, Asian and Latin American ancestry, as well as artists for who the Bronx has been critical to their development. The Museum provides direct support to artists through Artist in the Marketplace, which nurtures the work of 35  emerging artists each year and providers professional development seminars culminating in a multi-site biennial exhibition and catalog.

The Museum’s education department empowers students from grades K-12 by offering a variety of programs that inspire academic proficiency visual literacy and critical thinking. Through the Group Visits Program, students are exposed to the Museum’s works during single-session tours lead by teaching artists. Through In-School Partnerships. Museum educators work with school teachers to encourage scholastic excellence through the application of arts education techniques in addition, the Museum’s Teen Council Program helps Bronx high-school students build applied arts and media skills as they create a variety of visual and text-based materials.

(Bronx Museum of the Arts Mission-Website)

The Museum opened on May 11, 1971, in a partnership between the Bronx Council on the Arts, which was founded in 1961 and the Metropolitan Museum of Art. The opening coincided with a borough-wide “Bronx Day” event. The first exhibit consisted of 28 paintings from the Met’s collection. The Museum was first housed in the first floor rotunda of the Bronx County Courthouse. Additional galleries were located in the Bronx’s Co-op City, Bedford Park and Allerton neighborhoods. In its first 12 years of operation, the museum held over 350 exhibitions.

In 1982, the city purchased a vacant synagogue at 165th Street and the Grand Concourse as a new location for the museum. The new location opened to the public in May 1983 in conjunction with “Bronx Week”, which succeeded “Bronx Day”. The new space was inaugurated with an exhibition of twentieth artwork. It consisted of paintings, photographs and prints borrowed from the Met.

In February 2004, construction began on a $19 million expansion project that doubled the museum’s size 33.000 square feet. The expansion opened in October 2006. In 2008, a arts center was added to accommodate educational programs for local schoolchildren and their families. The Museum no longer charges fees since 2012.

The Bronx Museum of Art and its additions

The original design was by Simon B. Zelnick in 1961 and the extensions were designed by Castro-Blanco, Piscioneri & Feder in 1988 and a second addition in 2006 by Arquitectonica.